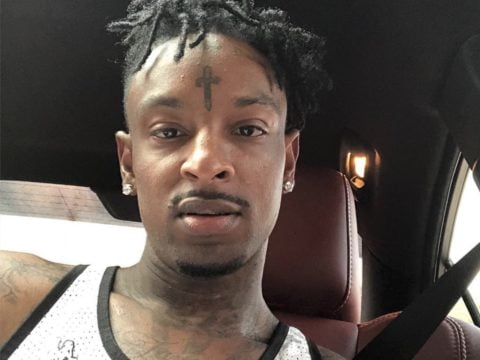 Atlanta rapper 21 Savage is in album mode. The hip-hop star has hinted at putting the finishing touches on potentially a new studio release.

Sav hit up social media this week to tease a new project possibly coming out in the coming weeks.

Over the summer, 21 put the Internet in tears with hilarious footage of himself crooning.

In late June, Sav dished on his close-knit bond to Young Money’s Drake.

“Drake just a genuine-a** good-hearted person,” he says, punting on why nobody else got him anything. “He did a lot of shit he didn’t have to do. He do a lot of shit for up-and-coming rappers, period. I don’t think he get his respect for that. Every f*ckin’ year, he pull a new artist up. Ain’t no other artist on his level do that sh*t.” (GQ)

21 also shot down speculation about recently trying to end the Pusha-T/Drake feud with a tweet telling people to end beefs.

“When I was talking about that, I wasn’t talking about [Pusha-T and Drake’s] beef. ’Cause they beef is like competition beef; it’s more like who-can-out-rap-who type shit. It’s different,” he tells me. “If I beef with somebody, it’s going to be more than just a song. I’ma be trying to kill your a**.” Given the recent fatal shootings of XXXTentacion and Jimmy Wopo, and the attempted shooting of Chief Keef in Times Square, the stakes outlined are, perhaps, not abstract. (There is no indication those shootings were related to rap feuds, but celebrity is not bulletproof.) “If you do a song saying you gon’ harm somebody that you rap beefing with, cut that sh*t out, unless you ready to kill somebody or die,” 21 says. “If I got beef with you, that mean I want to kill you. And I ain’t go through all this shit to get rich to goddamn go to jail for killing.” (GQ)