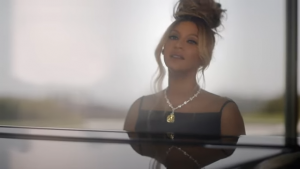 Beyoncé sings “Moon River” to JAY-Z in the new “About Love” clip shared by Tiffany & Co. The new clip is directed by Emmanuel Adjei, who led Black Is King, and is shot at the Orum REsident in Los Angeles.

The clip kicks off with JAY-Z at a typewriter, viewing Queen Bey depart a private jet. The meet as Beyoncé takes to a piano in the iconic Tiffany Diamond to homage Aubrey Hepburn’s 1961 performance.