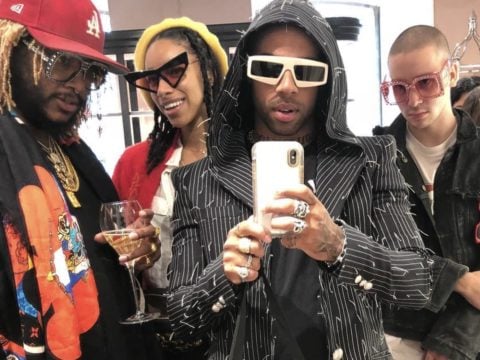 Motivational Monday. It’s a day to get motivational SOHH why not get things going with Vic Mensa allegedly dissing XXXTentacion? Speaking of tensions, did Lil Duval low-key fire a shot or just speak truth to Ja Rule in his quest to get a million followers? With today marking Columbus Day, is Hot 97’s Ebro Darden flaming Christopher Columbus? All this coming up in SOHH Whatcha Think.

Did Vic Mensa really take a shot at the dead? Hard to imagine shots could really get fired at XXXTentacion just three months after his death but there’s buzz suggesting Vic went there. Akadmiks is on it:

Are you taking this serious? Is this really for real for real? Will artists come out and speak on it? #SOHHWhatchaThink?

Is it possible for Ja Rule to get a million followers? In a world where people buy followers on the daily, it seems very easy but maybe not? Turns out Lil Duval isn’t here for Rule’s promise to drop a new song if he gets a milli. Baller Alert caught the exchange:

Is it possible? Think Ja can get a million Kehlani fans to follow him? Is this a PR stunt or nah? #SOHHWhatchaThink?

There are a lot of people enjoying today off because of Christopher Columbus but that’s not the case for Ebro Darden. The outspoken radio veteran is letting his true feelings loose. His IG is all over it:

Facts only! ・・・ One of the most disturbing forms of white supremacy is being told that because someone did truly evil deeds a very long time ago that their evil no longer matters. That’s a lie. I am a historian by training. Every credible historian I know will tell you that Columbus was an evil, violent, genuinely awful human being. He should NEVER be celebrated. He pillaged and raped and bought and sold human beings. Historians say he was an early sex trafficker of girls as young as 9 years old. He beheaded people. Cut off ears. Regularly even had his own people hung for minor offenses. He never even stepped foot in the continental United States. Listen to me: those crimes against humanity do not have an expiration date. He never should’ve been celebrated. #RP @shaunking

Only Christopher “WE” acknowledge is Wallace.