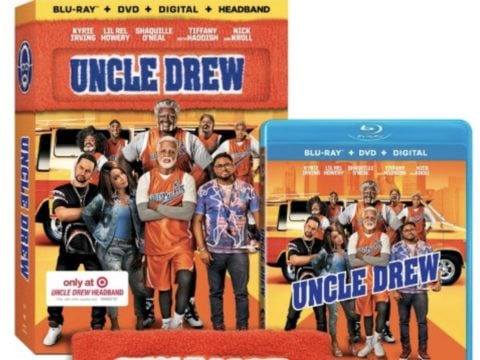 Are you bored with watching the same types of movies? Do you need a reason to stay in with a new flick? Gotta expand your Digital HD and Blu-ray/DVD collection?

Today, check out the top five reasons you should buy the new Uncle Drew movie right now on your favorite format! [Make sure to peep each reason and enter to win your own copy!]

The first reason you should buy Uncle Drew right now on Digital HD and Blu-ray/DVD is because of the overall plot. Keeping it fully 100 – there just aren’t enough great basketball movies out there anymore. The days of Love & Basketball, He Got Game and even Bow Wow’s Like Mike are so far behind us. But with Uncle Drew, you not only have some certified story plots but you have a stellar NBA squad of past and present studs gracing the screen. If you’re not the biggest fan of the NBA and WNBA, then the plot should gain your attention. Via Google and Wikipedia:

After draining his life savings to enter a team in the Rucker Classic street ball tournament in Harlem, Dax (Lil Rel Howery) is dealt a series of unfortunate setbacks, including losing his team to his longtime rival (Nick Kroll). Desperate to win the tournament and the cash prize, Dax stumbles upon the man, the myth, the legend UNCLE DREW (NBA All-Star Kyrie Irving) and convinces him to return to the court one more time. The two men embark on a road trip to round up Drew’s old basketball squad (Shaquille O’Neal, Chris Webber, Reggie Miller, Nate Robinson, and Lisa Leslie) and prove that a group of septuagenarians can still win the big one.

Way too much fun to ignore!

The second reason you should buy Uncle Drew is because of the star-studded cast. In most cases, we would focus on the hilarious comedians like Lil Rel, Tiffany Haddish, Nick Kroll, Mike Epps and oh yeah – J.B. Smoove but in this particular case, it’s all about seeing Hall of Fame NBA stars taking the spotlight. Kyrie Irving as Uncle Drew? Just imagine Bad Grandpa with epic handles and plenty of strong co-stars. Reggie Miller, Shaquille O’Neal, Chris Webber, Nate Robinson and the legendary Lisa Leslie come through in a big way.

The third reason you should buy Uncle Drew on Digital HD and Blu-ray/DVD is because of directing heavyweight Charles Stone III. Although the name might not ring an immediate bell, he’s responsible for some legit flicks – notably 2002’s Drumline and Paid In Full. He also did movies like Mr. 3000 and Lila & Eve. Even more exciting is the amount of music videos the Philadelphia native has directed. From endless The Roots visuals to Black Sheep, Public Enemy, Large Professor, Quad City DJ’s and A Tribe Called Quest – it’s safe to say Charles Stone III has plenty of experience behind the camera.

The fourth reason you should buy Uncle Drew on Digital HD and Blu-ray/DVD is because of all the bonus content. Of course I know what you might be thinking – “Fam, I already have Netflix and/or streaming channels, why do I need this? I’ll just watch it on there when it’s available.” Trust me, I’ve had the same thoughts in the past but what comes with each copy is the jam-packed bonus content. Watching a movie from start to finish just isn’t enough anymore. In the Uncle Drew Digital HD and Blu-ray bonus features, you get the Dear Drew animated short, deleted scenes, a making of featurette and director’s commentary are solid bonus perks.

The fifth reason you should buy Uncle Drew on Digital HD – more than ever – is being able to take this with you anywhere and everywhere. Whether you’re gearing up for midterms and need to crash in the library for a few hours or gotta go on that daily commute to work and school, watch Uncle Drew on your phone and tablet device. Anywhere you’re going, the movie goes with you. Just remember to download the full flick so you don’t have to rely on Wi-Fi passwords or using up any cellular data!

Enter to win your own Uncle Drew copy below!