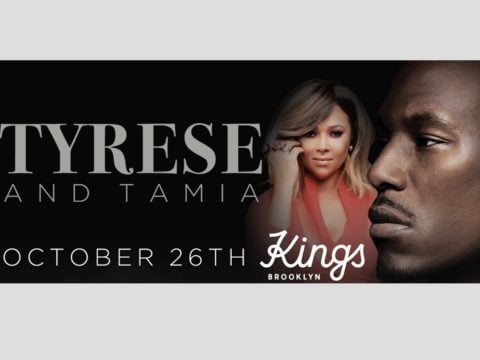 Are you low-key and high-key a big Tyrese fan? Do you realize how many dope hip-hop collaborations he has under his belt? Want to see the music veteran perform later this month at the legendary Kings Theatre in Brooklyn, New York?

Today, check out our top five Tyrese and Tamia hip-hop collaborations and enter to win tix to their Friday, October 26 show at Kings Theatre in Brooklyn, New York! [Peep each reason and enter to win your own passes!]

Easily one of Chingy’s biggest records of his career – this Tyrese-assisted and Jermaine “JD” Dupri 2006 smash is still legendary in 2018. The record is still relevant today for anyone dealing with those love/hate relationship goals.

Even though Ashanti initially had the nod from Fabolous, once “So Into You” dropped back in the early 2000’s, it was certified this is a Tamia and Fabolous classic. Loso’s signature flow is all over this record and has himn channeling those Ma$e vibes.

It’s easy to think of this as being a slept-on record since it’s posthumous, but if you know the root of what 2Pac is about, this is a perfect, reflective record. Tyrese comes through in a big way for Makaveli. Tyrese delivers some street poetry on here.

4. Keith Murray’s “Nobody Do It Better”

This has summer vibes all over it and it’s just a fun record. It’s been a minute since those Def Squad days but the veteran Keith Murray and Tyrese had epic chemistry on this banger.

This is a little bit slow-moving but Tamia delivers the right tempo to keep the vibes heavy. For 1997, Cool James made sure to keep the ladies satisfied with this R&B chill track.