Looks like everything is love between Tyga and the Kardashian clan,according to pictures that were taken Sunday (Sept. 23) at Beyoncé and Jay-Z’s On The Run II tour stop at the Rose Bowl in Pasadena, Calif. In what TMZ calls a ” chance encounter,” the “Taste” rapper was pictured hugging Kim Kardashian and Kris Jenner in the group. 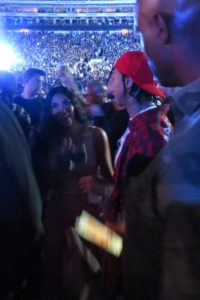 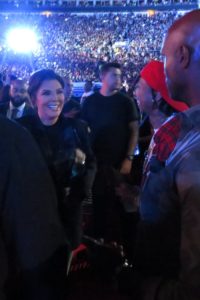 Tyga dated Kylie in an on-and-off relationship between 2014 and 2017, that started when the rapper was 24 and Kylie was 17. They eventually broke up, Kylie said later, after she considered that she was “really young.”

The Compton, Calif.- born rapper just recently spoke on the relationship on an August episode of Nicki Minaj’s Queen Radio show on Beats 1. Asked by Minaj whether he feels he should be given credit for Kylie’s success, Tyga said he most definitely believes he helped shape her image.

“She always had a platform. She was always destined to be what she was gonna be, regardless,” he said. “But when I stepped in … it was like, ‘You can do this, you should do this, you should start doing your hair like this … You need Black people to fuck with you ’cause you need culture’ … I had a lot to do with all that.”

Kylie is now with Travis Scott and gave birth to her babygirl Stormi in February. That same month, Tyga dropped his album Kyoto with the song of the summer “Taste.” The melody was certified double  platinum a month ago.

It’s also interesting to note that Kim was in attendance despite the fact of her unconfirmed secret feud with Bey.

The post Tyga Reunites With Kardashians at ‘On The Run’ Concert appeared first on The Source.