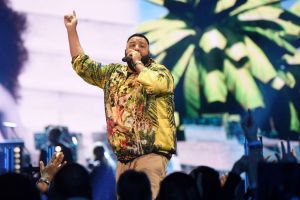 DJ Khaled is now 12 albums deep with the release of his latest set, Khaled Khaled, another project packed with stars that some expected to appear and others who came as a surprise. Fans on Twitter are taking in the album after its Friday (April 30) release, and the reactions are still pouring in.

Khaled Khaled, which is the actual real name of the boisterous personality and executive, features an epic list of famed performers that include Cardi B, Lil Wayne, Meek Mill, Justin Timberlake, Migos, and more.

The album opens with the aforementioned Weezy F. Baby with vocals from Jeremih, and it’s good to see his name in the credits considering his health woes. The track, “THANKFUL,” is produced by Khaled and Kane Beatz and sets the tone of the album. The next track, “EVERY CHANCE I GET” pairs Lil Baby with Lil Durk over production from Khaled and Tay Keith, teasing what should be a potent mixtape collaboration between the pair that is forthcoming.

One of the apparent early faves is “BIG PAPER” with Cardi B all by her lonesome and produced by Khaled and Cool & Dre, and she’s definitely talking heavy on this one.

DJ Khaled flexes his production muscles on his own with “WE GOING CRAZY” featuring H.E.R. and all three of the Migos in a refreshing audio reunion of sorts. But the record folks were mostly wondering about was “SORRY NOT SORRY” with Jay-Z and Nas alongside James Fauntleroy and what most speculate to be Beyonce under the guise of “Harmonies Of The Hive.”

The album features two previously heard tracks featuring Drake in “POPSTAR” and “GREECE” and Megan Thee Stallion joins forces with Lil Baby and DaBaby on the single-ready “I DID IT.”

Justin Bieber, Bryson Tiller, 21 Savage, Buju Banton, and more round out the rest of the album. The reactions to the project in full have been largely positive with the requisite criticism here and there. We’ve got the reactions listed out below.