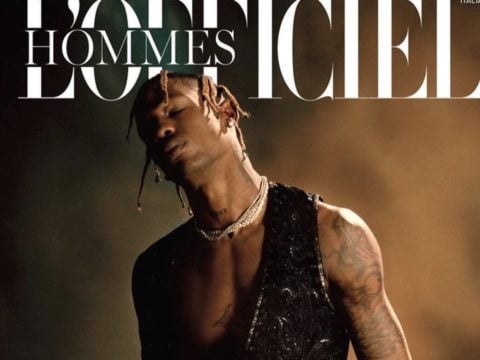 This week, both Scott and L’Officiel Hommes shared shots from the cover feature.

Shot by @amanda_charchian, styled by @ajmukamal. Tap the link in bio for more. #lofficiel #lofficielhommes #TravisScott

by @amanda_charchian, styled by @ajmukamal. Tap the link in bio for more. #lofficiel #lofficielhommes #TravisScott

Today, Scott is set to launch a jam-packed Astroworld Festival showcase in Houston.

Hill commandeers the stereo and puts on Travis Scott—“This might be the album of the year”—which eventually leads to a conversation about the time Hill went to Wyoming to see a MAGA-hat-era Kanye West unveil his new album. Hill’s had to answer a lot of questions about this trip since. “My sister didn’t speak to me for a week. We got into a fight.” And she was probably right, he says. “Now I’m just like: I love him as an artist, but I don’t agree with the sh*t he’s talking about right now, and I want to understand. I think that the people that love him, like myself, it’s getting a little past the point of, like: Just tell us something. Help us love you, you know?” (GQ)

This week, Travis talked about a potential approach to his Astroworld follow-up.

“I love Broadway, it’s super dope. It’s fire – yeah I was thinking my next album should be like, I’d do a play for a whole week somewhere, just do a play, design a whole play around my album. Yeah.” (“The Ellen DeGeneres Show”)