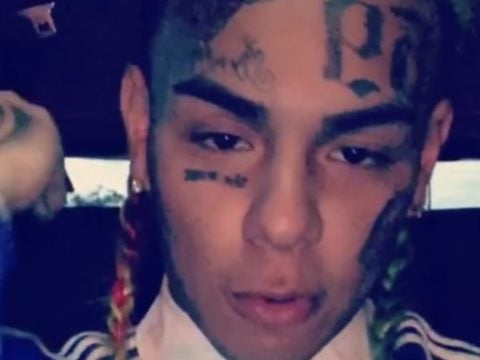 New York rapper Tekashi 6ix9ine has bigger things to worry about than law enforcement trying to pin a gun charge to him. The hip-hop newcomer is reportedly confident there’s no connection to a weapon recently discovered in his Brooklyn home.

According to reports, Tek’s legal muscle doesn’t think a gun charge will land on his client’s record.

Tekashi69 is already working on his defense after a gun turned up when federal agents raided his home … and he sounds confident there’s no way the feds can pin the firearm on him. Tekashi’s defense attorney, Lance Lazzaro, tells TMZ … a gun charge would be a very difficult case to prove because the rapper doesn’t even own a piece. (TMZ)

A few days ago, reports went viral about federal agents busting into Tek’s crib and finding a gun.

Law enforcement sources tell TMZ Tekashi was not home during the time of the raid. It’s currently unknown what prompted the search, or who the gun discovered in the home belonged to. A source close to Tekashi tells us the rapper was already in the process of moving out of the Brooklyn home that was raided. (TMZ)

Despite the seriousness of the situation, Tek has reportedly not lived in the BK spot since the summer.

We’re told 6ix9ine had not been in the house for several weeks, and many people — including movers and cleaners — have been inside the property lately. You can see from the pics, multiple agents showed up at the home for the search. We’re told NYPD also assisted. (TMZ)

Last week, Tek shared his opinion on why he’s winning and most rappers are flopping.