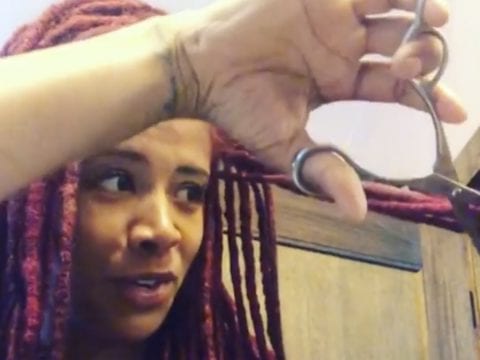 New York rap veteran Nas‘ ex-wife is going for a new look. Kelis has shocked fans with new footage of herself cutting off her signature dreads on-camera.

Big Facts: On Thursday, Kelis went to Instagram to deliver the jaw-dropping clips.

On A Related Note: In March 2019, Kelis blew up Instagram with a slew of bikini pics donning a short haircut.

Wait, There’s More: In February 2019, reports emerged about Kelis’ ex-husband Nas having issues with her taking their son on trips to Colombia.

Nas is pissed off about a bunch of child custody issues — the biggest being Kelis’ plans to hightail to Cartagena. According to docs, obtained by TMZ, Kelis already took 9-year-old Knight to Colombia last month. Nas says he was supposed to get their son on New Year’s Eve … but Kelis texted him to say the plan had changed. He says she didn’t come back to the states until Jan. 14. Further, he says Kelis has told him she and her new husband have a farm in Colombia and she intends to stay there. Nas says she’s already withdrawn Knight from his private school in L.A. … and he says Kelis is currently homeschooling the kid in Colombia. (TMZ)

Before You Go: A few hours prior, Nas raised eyebrows after revealing his interest in tying the knot.

The post Nas’ Ex-Wife Kelis Shocks Everyone By Cutting Off Her Dreads On-Camera: “I Have No Idea What My Plan Is” appeared first on .