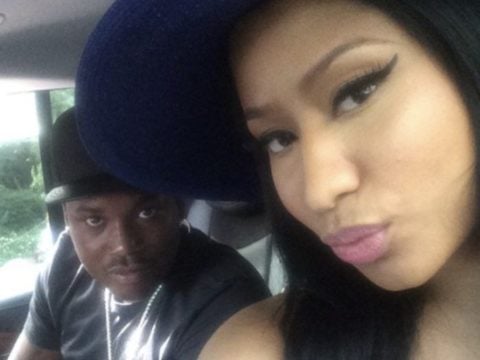 Maybach Music Group’s Meek Mill might have just responded to possible shade thrown his way from the queen of rap. The Dreamchasers boss has appeared to respond to Nicki Minaj sharing emotional words about being in an abusive relationship.

Last night, Meek Milly went to Instagram with a post about narcissists and a spot-on possible reference to Nicki’s clips.

Uh-oh…. really sounds like this could be @MeekMill response to @NICKIMINAJ #Queen pic.twitter.com/SpLrdty0ye

Yesterday, Nicki released a few Queen documentary preview clips revealing how she became the victim in a past relationship.

“I remember when my mother, um, would let my father be violent with her and she always brings up the story, as a little girl, I would – stand in front of my mother [with my arms protecting her] and I vow, that’s why like, maybe some people would describe me as abrasive or b*tchy or whatever because I vowed from that age no man would ever abuse me, call me out my name, treat me like that. And then all of a sudden, that was my life. Everything that I said, I will never – who was I going to inspire when I had nothing in me to even give? Like, I let one human being make me so low that like, I didn’t even remember who I was. I was scared to get in the studio. I didn’t believe in myself. All of a sudden, in Miami, I started catching a vibe. As soon as I changed locations, and then one day I got the vibe, ‘Okay, it’s time to go to New York.’ You were there, you saw what happened.”

On Nicki’s “Barbie Dreams” single, she jokingly talks about her ex-boyfriend Meek Milly low-key creepinging into her direct messages.

“Drake worth a hundred milli, always buying me sh*t/But I don’t know if the p*ssy wet or if he crying and sh*t/Meek still be in my DMs, I be having to duck him/”I used to pray for times like this.”/Face a** when I f*ck him” (“Barbie Dreams”)

@MeekMill and we see @NICKIMINAJ with the

Last year, the Philadelphia native revealed how much he loved Nicki during their two-year stint together.

“I always wanted Nicki my whole life … I bagged that. Of course breaking up with anybody you love is a loss, period. … I was too comfortable: I had Nicki, I’m getting all this money, living in Beverly Hills, getting high — there was nothing else I wanted at that point. Now it’s time to get this money. I’m [going to] show you who Meek Mill is.” (Power 99 FM)

The post Meek Mill Responds To Nicki Minaj’s Abuse Claims? “They’ll Lash Out By Claiming THEY Are The Real Victim” appeared first on SOHH.com.