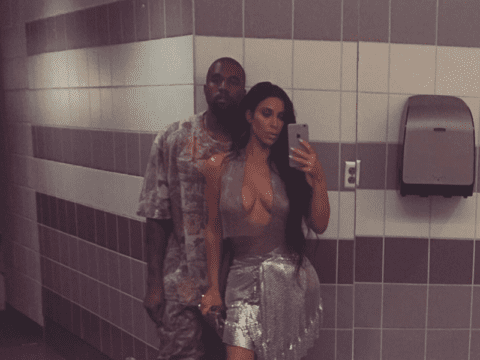 A screenshot has emerged of Kim low-key letting Yeezy know she wanted to see what’s brewing underneath his pants.

Kanye took to Instagram on Sept. 25 to share a pretty innocent-looking photo, which shows his leg outstretched on a couch, showing off his shoes. However, ​Kim noticed something more important- the fact that he’s wearing grey sweatpants. “Grey sweat pants challenge? Lemme see,” Kim K commented, referencing the 2016 trend #GreySweatpantsChallenge, where people would upload selfies online in the light-colored sweats, attempting to show off what’s beneath the pants. (Floor8)

Recently, Kim shared a pic of her Ye’s kids.

Wild Hair Don’t Care. *Don’t worry I’m holding her up from the back

Last month, Kim revealed a few names she and Ye initially came up with for daughter Chicago.

“Chicago just looks really long to me and doesn’t flow, so I call her Chi. That’s it. She can decide later if she wants to be called Chicago or Chi. But she’s so girly. When she first came out I was like, ‘What do we name her?’ It was the hardest decision ever and I could not think of a name.” Kardashian West also opened up about other options that she and West, 41, batted around. They were going to name her Rei in honor of West’s father, Ray West, or Jo in honor of Kardashian West’s grandmother, Mary Jo “M.J.” Houghton, but the KKW Beauty mogul said that her baby girl “doesn’t look like” either name. (People)

A few weeks ago, Kim went to her IG page and shared a close-up look at their daughter Chi.

Not even Chi is safe from the Snapchat/IG Live