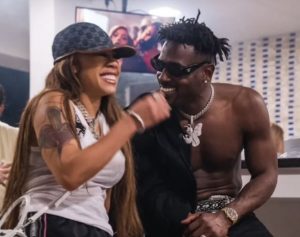 Are Keyshia Cole and Antonio Brown an item? The R&B singer has the Internet buzzing about a potential romance between the two. Throwing gas on the fire, Cole posted a picture of herself sitting next to AB with the caption “Missing him a lot.” The two collaborated on music but appear to have developed a relationship.

Also online, Cole revealed her celibacy vow has come up short, telling fans they can erase that goal she had. You can catch all of her life updates below.

The post Keyshia Cole Shares Pictures of Antonio Brown: “Missing Him a Lot” appeared first on The Source.