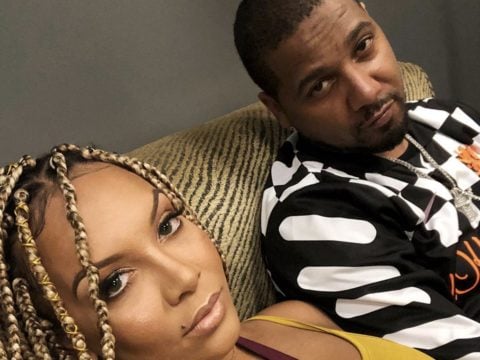 New York rapper Juelz Santana and Kimbella looking inseparable af. Weeks after Santana received the green light to move back in with his longtime girlfriend, the hip-hop veteran has shared a new coupled up pic.

Last night, Santana jumped on Instagram with an epic shot of himself alongside Kimmy.

Earlier this month, reports surfaced about Santana getting to reunite with Kimbella.

The rapper was prohibited from living with her until now because he was ordered to home incarceration at this mother’s house. Santana is now is under home detention, which allows him to leave his home for certain reasons. He will have to complete anger management/domestic violence counseling and will have to call for approval before leaving the home. He will also no longer have to submit to drug testing. (The Blast)

Happy Birthday Juelz…. Watching Him Grow Is Such A Joy… Daddy Loves U So Much… #Pop #YoungKing

According to reports, Juelz appeared in court last month and pleaded guilty to his gun possession charge stemming from a March gun-related arrest.

Santana, whose real name is LaRon James, pleaded guilty Thursday to possession of a firearm by a convicted felon and carrying a weapon on an aircraft. The 36-year-old Totowa, NJ, resident faces up to 20 years in prison when he is sentenced Dec. 12. (Page Six)

“Juelz is doing good. I mean, we talk about the bigger scheme of things. He’s in a bad situation but his spirits are up. He was smiling. He’s glad to be back home with his family, with his kids, with his mom, his brothers. It’s nothing like being home and going through some realities in life that make you straighten up and focus at all costs. He’s in a hell of a situation but you know we always say our prayers, we hire great lawyers and we put it in God’s hands. He’ll be alright. Never want to be mad at Juelz. He piss you off sometimes – he’s got the little brother syndrome forever. Me and Cam was laughing the other night. We got like a high school mentality forever. We’re just stuck in that realm. Juelz is always like 16 to us but he’s a grown man. We gotta stop that sh*t. But overall he feels good. He understands he’s blessed to be out on bail and he’s got a chance to work again and the best thing he can do right now is get in that studio, work, get his music out and start making some money and get back reacclimated to the game and let’s do this Diplomat thing – you hear what happened but you don’t know what happened. I can just tell you that. There’s always more to it. There’s three sides to every story but that’s not my situation to talk about. I’m just happy that he’s out to make some money for his family and make some money for his lawyers and get a second chance and all that. He’ll be alright.” (“The Angie Martinez Show”)

The post Juelz Santana & Kimbella Are Cooking Up Storms Together appeared first on SOHH.com.