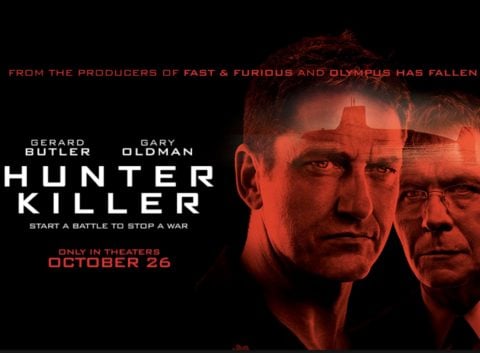 Tired of seeing boring movies? Need some excitement on the big screen? Not about that horror movie life?

Today, check out the top five reasons you should go see Hunter Killer when it hits theaters Friday, October 26! [Check out each reason and grab your exclusive passes to a select movie screening while tickets are available!]

The first reason you should get out to see Hunter Killer is because of the overall plot – this is not a cheesy horror movie, flick filled with superheros or even a romantic comedy. Instead, this is a jam-packed action thrill ride. Peep the plot via Wikipedia:

Deep under the Arctic Ocean, American submarine Captain Joe Glass is on the hunt for a U.S. sub in distress when he discovers a secret Russian coup is in the offing, threatening to dismantle the world order. With crew and country on the line, Captain Glass must now assemble an elite group of Navy SEALs to rescue the kidnapped Russian president and sneak through enemy waters to stop WWIII from beginning. (Wikipedia)

The second reason you should go check out Hunter Killer is because of the jam-packed cast. If you know anything about Gerard Butler, you know he lives for these types of movies. From flicks like Den of Thieves and Geostorm, he’s always clutch with the action. Along with Butler, you can expect major performances from Gary Oldman, Common and Linda Cardellini. This star-studded cast raises expectations.

The third reason you should check out Hunter Killer is because director Donovan Marsh takes charge and really amps up the stakes. While his name doesn’t ring as many bells as a Michael Bay or Spike Lee, he does have solid Hollywood connections and links to both TV and films from mid-2000’s “Hard Copy” to directing Avenged back in 2013. Without a doubt, the pressure is on for him to deliver a box office success with such a stellar team and if this movie does what it should do, this could become the turning point in his career.

The fourth reason you should go check out Hunter Killer when it comes out October 26 is because of the action-packed drama. Of course it’s October and there is a need to see horror flicks – but you can always save those for the Netflix and chill goals and really embrace a fun movie. If The Meg set the standard in action-packed fun over the summer, Hunter Killer has the same capabilities for the fall.

The fifth reason you should go check out Hunter Killer is because there isn’t much competition – at all. Most of the big flicks dropped earlier in the month and this weekend looks like Hunter Killer could go in for the kill facing off with movies like Indivisible and Suspiria or even Mr. Bean returning as Johnny English Strikes Again.