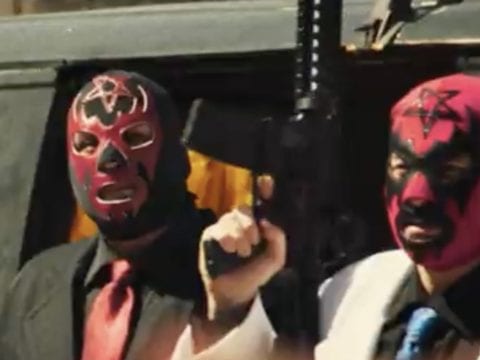 It’s officially Halloween season and there’s nothing better than binging on all of your favorite old school horror flicks. Director Rob Zombie has come through with the Digital HD/Blu-ray release of his new 3 From Hell scary movie – check out a behind the scenes special feature below before grabbing your own copy! Watch below!

First there was House of 1000 Corpses. Then there was The Devil’s Rejects. Now, from writer-director Rob Zombie, comes the next blood-soaked chapter in the most violent crime saga in movie history — 3 From Hell. After barely surviving a furious shootout with the police, Baby Firefly (Sheri Moon Zombie), Otis Driftwood (Bill Moseley), and Captain Spaulding (Sid Haig) are behind bars. But pure evil cannot be contained, and a firestorm of murder, madness, and mayhem will be released in this terror ride to Hell…and back.

Take home 3 From Hell and immerse yourself in its blood-soaked world with exclusive and extensive special features, including an audio commentary with director Rob Zombie and a 4-part “making of” featurette. Additionally, the 3 From Hell 4K and Blu-ray discs will feature the unrated cut, even more sadistic and terrifying than the theatrical version of the film. The 3 From Hell 4K Ultra HD Combo Pack, Blu-ray Combo Pack, and DVD are available for the suggested retail price of $29.99, $24.99, and $19.98, respectively.