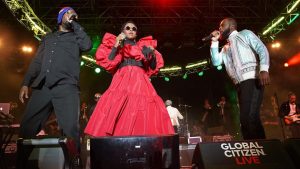 Fugees shook up the game with the announcement of their world tour in celebration of The Score. This will be the first world tour in 25 years for Ms. Lauryn Hill, Wyclef Jean, and Pras Michelle.

Giving a taste of what’s to come, Fugees appeared at the Roof at Pier 17 in New York City for a partnered performance with Global Citizen Live. The trio took the stage in front of a crowd of over 3,000 but took the stage after three and a half hours of waiting for the audience.

During their time on stage, Fuugees performed seven songs. Opening with “The Score,” the trio would go on to perform “How Many Mics,” “Zealots,” “Fu-Gee-La,” “Killing Me Softly,” “Ready or Not,” and “No Woman, No Cry.”

The show with Global Citizen was the kickoff. Next, the tour, presented by Diaspora Calling and produced by Live Nation, will hit the United Center in Chicago on November 2 before hitting Los Angeles, Miami, Newark, Paris, London, and more, before finishing the tour in Africa, with the final shows taking place in Nigeria and Ghana.

“The Fugees have a complex but impactful history,” said Ms. Lauryn Hill. “I wasn’t even aware the 25th anniversary had arrived until someone brought it to my attention. I decided to honor this significant project, its anniversary, and the fans who appreciated the music by creating a peaceful platform where we could unite, perform the music we loved, and set an example of reconciliation for the world.”

Wyclef Jean added, “As I celebrate 25 years with the Fugees, my first memory was that we vowed, from the gate, we would not just do music we would be a movement. We would be a voice for the un-heard, and in these challenging times, I am grateful once again, that God has brought us together.”

Pictures from New York City can be seen below.

The post Fugees Unite on Stage at the Roof at Pier 17 in New York City appeared first on The Source.