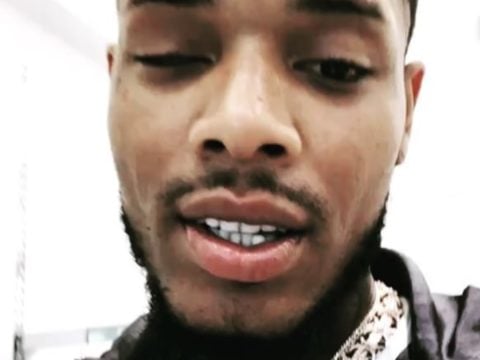 New Jersey rapper Fetty Wap is now officially down with the self-proclaimed King of New York. The hip-hop star has reportedly teamed up with Tr3yway Entertainment – record label home to Tekashi 6ix9ine.

Over the past few hours, social media has exploded with announcements suggesting Fetty has signed with the popular label.

A few months ago, a report went viral about shots going off following a Tekashi and Fetty Wap entourage confrontation.

Law enforcement sources tell TMZ … 6ix9ine and his crew hit up a recording studio Wednesday night in L.A. to meet up with Fetty. We’re told Tekashi never made it inside because Fetty’s posse stopped them at the door. We’re told a confrontation ensued and, at some point, someone pulled out a gun and fired a couple of shots in the air. (TMZ)

Despite the alleged dicey encounter, reports claimed Tek and Fetty’s crews had since linked up on multiple occasions since the shooting.

A witness called cops, but everyone had already left by the time they showed up. We’re told cops recovered shell casings and are now on the hunt for the shooter. Our Fetty sources claim the rapper wasn’t even in L.A. the night of the shooting. (TMZ)

Earlier this year, 6ix9ine and Wap linked up for their “KEKE” collaboration.