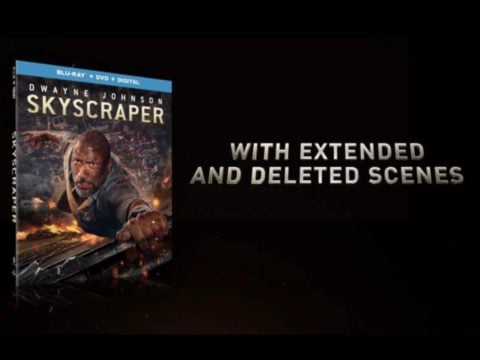 Tired of watching the same movies? Could you use a little action in your life? Looking for a jam-packed action disaster flick in our collection?

Today, Skyscraper star Chin Han‘s five reasons you should get your hands on the must-see flick on Digital HD right now and Blu-ray/DVD October 9! [Make sure to check out each reason and enter to win your own copy!]

The first reason you should get Skyscraper is to see my character Zhao Long Ji. Zhao was a fascinating character to work on because director Rawson Thurber had written so many layers into him. I think when he starts out you see him as this flamboyant and somewhat astute serious billionaire who has his own reasons for building this massive structure in the sky and it’s also a building that is the smartest man-made construction in the world. It has an ecosystem of its own. It has a 20-story garden within it. It’s self-sustaining with solar panels. It’s a living being. For me to do the research on Zhao, I read up on architectural books. Zhao believes he’s making the world a better place with this giant structure and of course as the movie goes on, you’re not quite sure why the building is under assault and there’s lots of twists and turns before you get to the climax of the movie which is one of the most fun scenes to shoot. It’s one of the visually striking scenes in film.

The second reason is because these are fun movies. It’s always fun going on-set because it’s like a kid going to a candy store everyday. You don’t know what to expect. The first day I filmed was the scene where I’m in my penthouse bedroom where I go to retrieve the data from that disk that I have and that set was so huge with a walk-in wardrobe and these incredibly high ceilings and secret doorway that goes into the window of the skyscraper. That was my first day on set so you can imagine what the rest of my days were like. It really is a lot of fun doing these blockbuster movies. At the same time, it’s challenging as an actor because you have to try to move these characters in reality otherwise you have an audience who doesn’t care for them. In that respect, Neve Campbell, who plays Will Sawyer’s wife and Dwayne Johnson and Roland Moller who plays Kores Botha, they all do a wonderful job creating this world in which Skyscraper takes place. And of course you can’t forget the two incredible kids. I’ve worked with kid actors before and these two were exceptional. They were so committed to their performances and everyone loved them on-set.

The third reason you should get Skyscraper is because of all the features you get to see. On the features, you get to see all of the thought that went into the movie and what the inspirations were for either Will Sawyer or even for my character Zhao. I think we looked into some great inventors from the 20th century. You get to pull back the curtains and see how it all came together. You get to see how the movie was made. The HD and Blu-ray stuff is going to really show off the cinematography. The definition, the colors, it’s a very immersive experience.

The fourth reason is because of the authenticity A lot of times you would see a movie with Asian actors and either the language is not spoken precisely or dialect might not be used correctly. But in this case I believe a lot of time was taken to get the right dialect and vocabulary. I think we had native speakers play the roles of people like the inspectors and that’s a level of authenticity you really observe.

The fifth reason is because of the script. I’m a big movie lover myself. I think this movie invokes a lot of movies that I loved in the 80’s. Cliffhanger. Die Hard. Dante Inferno. Whenever I read a script like that, this is a dream come true when I do a movie like this. The movie totally spoke to me and I had a great time working on it.