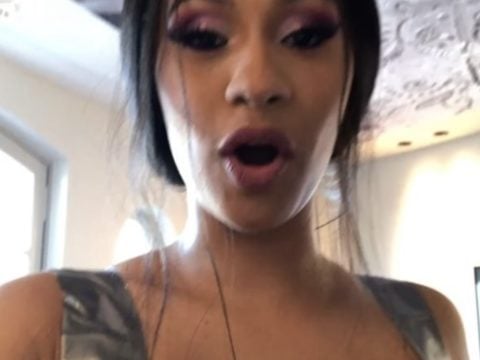 New York rapper Cardi B‘s breasts are pretty much out of order. The hip-hop diva has announced she’s getting ready to take time to renovate her twins.

Cardi went to Instagram this week to explain the wear and tear her daughter Kulture Kiari has put on her chest since giving birth earlier this year.

“I have never done this sh*t in my life but f*ck it. I have to f*cking tape my t*tties up because, son, um, giving birth and sh*t, my t*tties were already a little low-low, you know what I’m saying, because I got my t*ts done when I was 19 and I never wore a bra and sh*t. When I was pregnant, my sh*t was looking nice though. I was like, ‘Ah, sh*t!’ Now though, now Kulture did my filthy. I don’t give a f*ck. If y’all motherf*ckers see me gone in November and December. I’m getting my t*ts done! I don’t give a f*ck. Matter of fact, I’m not even gonna call it surgery. I’m gonna call it t*tty renovation because I gotta renovate these sh*ts. I’m out here taping myself.”

This week, B reacted to becoming the first female rapper with three Hot 100 chart-topping singles.

The post Cardi B’s Boobs Are Done: “I’m Getting My T*ts Done! I Don’t Even Give A F**k” appeared first on SOHH.com.