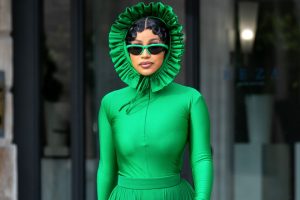 Cardi B is in the clear for her latest court ruling.

On Wednesday, a judge ruled in Cardi’s favor after the man who claims she stole his tattoo design asked a judge to sanction her for attending Paris Fashion Week.

According to Radaronline, Kevin Michael Brophy is suing the Bronx rapper for at least five-million-dollars accusing her of using his distinctive tattoo of a tiger and a snake for the cover of her mixtape.

While the trial was slated to begin this month, the “Up” rapper asked for a delay saying that she needed more time to make arrangements for her family to travel from New York to California, where the trial will take place.

Her lawyer wrote, “For medical reasons, it is inadvisable for her to travel from her present residence on the East Coast to Southern California.”

“Being in the immediate post-natal period and nursing her newborn child, it would be an unreasonable imposition upon her to require her to actively be present for and participate in pretrial preparation and attendance at the trial itself,” Cardi’s attorney claimed.

Brophy cried foul and attempted to have the New York native sanctioned but his efforts failed. Brophy demanded the trial date be immediately pushed up to December and Cardi be ordered to pay $8,130 in sanctions.

However his efforts failed and Judge Cormac Carney sided with Cardi.

“In short, the court sees no reason to advance the trial date or issue an order to show cause regarding sanctions at this time,” ruled Judge Carney.

Brophy and Cardi B’s court trial is scheduled for February 1, 2022.

The post Cardi B Wins Court Ruling After Traveling Abroad For Paris Fashion Week appeared first on The Source.