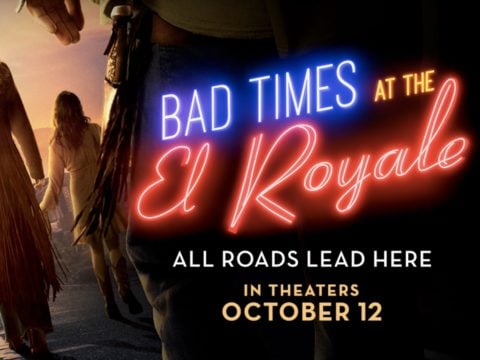 Do you love action-packed mysteries? Want to see a flick packed with twists? Need to see some of the biggest Hollywood stars all on the same screen?

Today, check out the top five reasons you should go see Bad Times at the El Royale when it hits theaters Friday, October 12! [Check out each reason and grab your exclusive passes to a select movie screening while tickets are available!]

The first reason you should go out and see Bad Times at the El Royale is because of the gripping trailer! It’s no offense to superhero movies or special effects-driven sci-fi flicks but there’s nothing better than old-fashioned acting with a diverse cast. Mystery? Check. Twists. Check. Who dunnit? Check! Peep the Google synopsis:

Seven strangers, each with a secret to bury, meet at a run-down hotel in Lake Tahoe in 1960s California. Over the course of a fateful night, they all get one last shot at redemption before everything goes wrong.

If you can appreciate a great drama where every character has way more to their characters than what initially meets the eye, this is the go-to movie to see!

The second reason you should go see Bad Times at the El Royale when it hits theaters October 12 is because of the jam-packed cast. No matter who you lean on, he or she is a certified Hollywood superstar. Could you use a little Thor in your life? Look no further than Chris Hemsworth. Are you a fan of the Big Lebowski? Jeff Bridges, anyone? The cast is super stellar as Cailee Spaeny, Jon Hamm, Cynthia Erivo, Lewis Pullman and many, many more Hollywood elite grace the screen all in the same movie. If star power is what you’re about, this is a must-see!

The third reason you should check out Bad Times at the El Royale is because of the director. Hollywood heavyweight Drew Goddard really sets the stakes high. Goddard isn’t just the master behind the lens, he also put together the screenplay and is one of the flick’s producers. Needless to say, he’s super invested in this thrill ride. Goddard has either written or directed big movies like Cloverfield, The Cabin in the Woods, World War Z, The Martian and the upcoming X-Force movie. In other words, Drew Goddard knows what it’s like to put together a blockbuster hit movie.

The fourth reason this is a must-see movie is because of the genre. It’s no offense to sci-fi, animated or superhero-driddle movies, but those movies can become a bit … repetitive. Bad Times at the El Royale is something we rarely see. This is an original, star-studded must-see mystery thrill ride. The streak of stellar mysteries hitting the big screen is finally coming to an end with this major release!

The fifth reason you should go see Bad Times at the El Royale is because it’s going to be a major movie weekend! There’s nothing wrong with some friendly competition but when you put up this must-see movie with Goosebumps: Haunted Halloween and First Man? Let’s just say it’s going to be a crazy exciting box office weekend. If you’re into fun, jam-packed theaters will moviegoers, this is the weekend to head out and have some fun with popcorn, candy and plenty of beverages!

Grab your Bad Times at the El Royale screening passes below while they last!