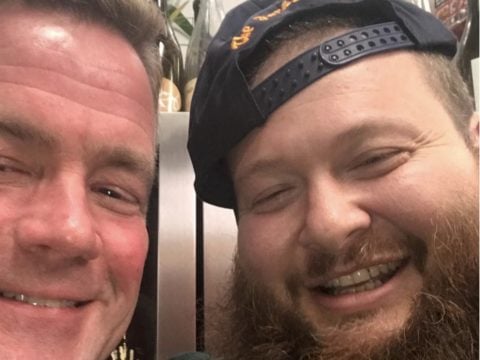 AB went to his social media channels last night (November 7) to reveal his cross-country run starts up in February.

WHITE BRONCO TOUR WITH @rocmarci AND @meyhemlauren LETS GO. I PROMISE I’LL BE AT EVERY SINGLE ONE OF THESE SO HELP ME STARS. GET YOUR MOTHAFUCKING TICKETS NOW!!! MORE DATES TO BE ADDED.

A few days ago, Bronson talked about his split from longtime record label and entertainment company Viceland.

“They could use that energy and use it to promote the show that’s on their channel. My show. They could promote the music I just put out being that we worked together for six f*cking years. It just irked me. It was an underlying thing. It wasn’t just that. It was all types of things behind the scenes that have been upsetting me for years. At this moment, I’m just ready for a new endeavor. A new chapter. It’s been beautiful. They gave me opportunities to do things that other companies wouldn’t have allowed. I did what I wanted. I made shows out of nothing and they ended up being incredible – it’s just living life – [my show] ‘F*ck That’s Delicious’ I love that show. Let’s hope it happens again. Let’s hope we go to Brazil. Argentina – I’m trying to go to the craziest places possible if we do another season. We’re not going to f*cking Brooklyn. We’re not going to eat Jamaican food in South Jamaica. It’s a wrap. I’m not going to look back in the past and be upset about anything. I feel like it could have been nurtured a lot more on a lot of different parts. Sh*t happens and it is what it is.” (Hot 97)

“Remember Salt Bae?” asked the tweet. “This is him now. Feel old yet?” However, instead of a photo of the infamous chef, the tweet attached a gif of Action Bronson using a salt grinder to prepare a dish, taken from F*ck, That’s Delicious. Bronson did not find it funny. “YOU WEIRDO MOTHERF*CKERS ARE LUCKY TO HAVE EVER BEEN IN MY PRESENCE,” he responded in all caps. “F*CK YOU AND ALL YOUR BULLSH*T. ILL TAKE MY TALENTS ELSEWHERE BECAUSE YOU SURE DON’T APPRECIATE WHAT I’VE DONE FOR YOU.” He further went on to clarify that he owns the rights to his show and that he is no longer signed to Vice‘s label. (UPROXX)