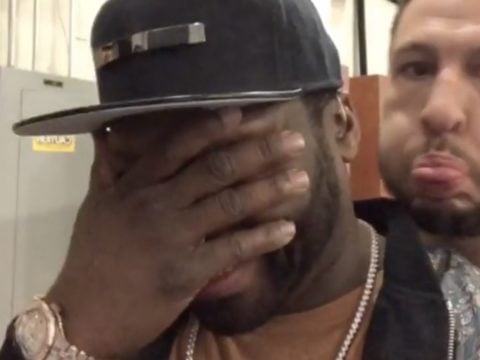 Stop being a weirdo @50cent …. With this goofball shit.

. But speaking of… . . I work for a media company and help people get info hiding nothing. You seem to never get in trouble for your affiliations, why is that?

Hmmm… hopefully not too long.

Back in September, Tek went off on Ebro for hating on him.

Never one to back down, Ebro made sure to respond to 6ix9ine’s disses.

He should have put this much energy into his verse on #GetTheStrap cause that shit doo doo!!

Back in June, Tek ripped Ebro after denying him a chance to pull through at the annual Summer Jam concert.

“I’m gonna say this one time and one time only. Ebro, you are p*ssy. Don’t let nobody forget the fact that a couple years ago 50 Cent told you, ‘Boy, stop f*cking playing with me or I’ll smack the sh*t out of you. I’ll f*ck you up!’ And you said, ‘Yo bro, chill.’ You wouldn’t f*cking meet up with me. Everybody in this f*cking city knows who I am and knows what I do. All the trolling and sh*t is cool but read about me. Read what happens. But I’m not gonna do that in this situation because now I’m understanding why people are scared of me. I understand that. You can hate 6ix9ine all you want. You can say this is the reason why people don’t like 6ix9ine, I understand that, but you can’t deny the fact you have a New York station, a New York concert and everybody, I don’t give a f*ck who was on that line-up, shout-out to everybody that was on that line-up. The main concern was the rainbow-headed motherf*cker on that stage. Nobody gave a f*ck about nothing else.”

#tekashi69 ain’t laughing at #ebro attempt of clowning him being denied entry into hot 97 summer jam.