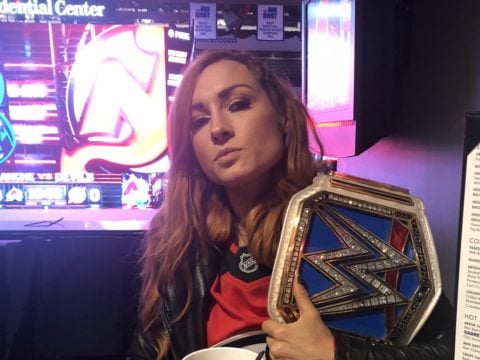 With a highly-anticipated Smackdown show set to go down next Tuesday (October 23) at Newark, New Jersey’s Prudential Center, WWE champion Becky Lynch took a moment from her Devils WWE Night Thursday (October 18) to chop it up with SOHH about everything from her rise to the top to naming the Cardi B of her sport.

The Cardi B of the WWE. She talks a lot, right? Flexes a lot. But has the numbers to back it up. Talks a lot. Has the numbers to back it up. Flexes a lot. That sounds like the camp. That sounds like the champ. I don’t know though. I don’t know. Because I have a different swagger about me. I want to answer this properly. Who would be the Cardi B? Maybe Carmella. Maybe Carmella. She talks a lot. She flexes a lot. She says she’s money. I mean, isn’t that Cardi B kinda says? Things like that? Kind of? A little? Alright, let’s give it to Carmella.

I love grapes. There are so many grapes. Have you had cotton candy grapes? There’s these things called cotton candy grapes and they’re amazing. They taste like cotton candy. Then there’s the moon grapes. Have you seen them? They’re the lengthy grapes. There’s a whole world of grapes out there. THe other day, I had these little grapes and they tasted like grape jelly. There’s this sugar explosion but they’re just regular grapes. They’re real. Probably genetically modified grapes but my goodness were they delicious. The champs likes a lot of grapes. She likes the antioxidants of grapes. It’s not that she’s a wino and she can’t wait, no, she likes the grapes. And in catering there’s always lots of good, fresh fruit and I don’t know. I like something there’s very light. I try not to eat very much during the day when I’m wrestling. But I need a little energy. I’ll pop a few grapes into my mouth.

3. Where – do you find yourself with the whole WWE Evolution?

I was actually wrestling for two years when I was 15. I started wrestling when I was 15. I didn’t go with the intention of being the WWE superstar because I didn’t believe it was an attainable goal. How does a girl who has failed PE and being a little bit of a chubby kid her whole life go on to be a WWE superstar? But I loved it. There was nothing that gave me such drive and such purpose. After two years of just wrestling and trying my hardest, getting better at something and dedicating myself to something for the first time in my life, I was like, ‘Ah, no, this is really what I want to do.’

5. Why – is right now the Becky Lynch takeover?

I have been the underdog and overlooked for far too long. I have been the carrier of the division. I have carried every single person through that division. I have been a stepping stone for people to use to make a name for themselves. I’m sick of that. I finally got enough belief in myself to say, ‘No. I’m not being a stepping stone for anybody.’ I’m being on the top. I’m the top dog and I’m taking it and I’m not waiting for anybody’s permission. I’m not asking anybody for permission and I’m not asking anybody for forgiveness either. This is my time. I’m claiming it. I own this and I deserve this.

The post WWE Champion Becky Lynch Tells Us Who’s The Cardi B Of Wrestling Right Now appeared first on SOHH.com.