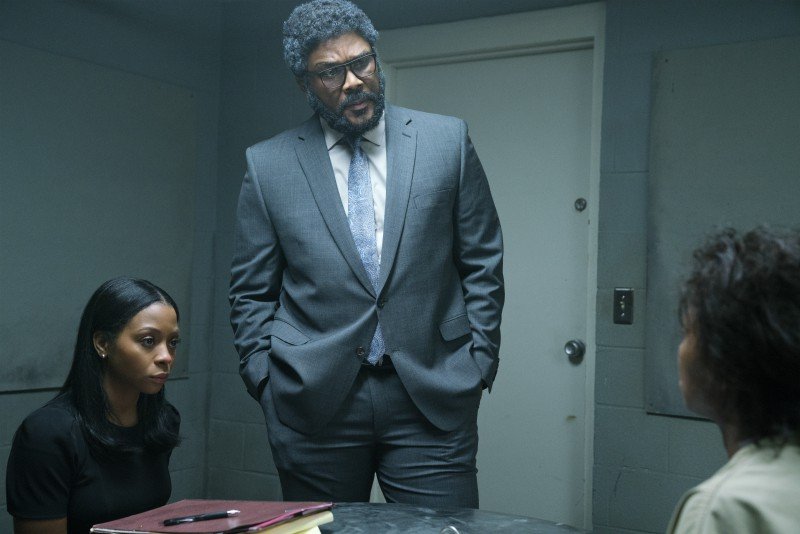 Tyler Perry ended 2019 on an epic high note with the opening of his grand movie studio is Atlanta, which has been heralded as the pinnacle of Black excellence, but his latest film landed him on the receiving end of endless jokes.

After the debut of his latest film, A Fall From Grace, many fans were taken aback by the wig selections used for both the men and the women. The film, which holstered an amazing cast of actors and actresses including Phylicia Rashad and Cicely Tyson, was the first since Tyler Perry publicly admitted via Twitter that he created his films without the use of other writers.

“So, I don’t know if you know this, but all shows on television have a writers room,” Perry said. “Most of the time, there are 10 people or 12 or whatever that write on these television shows.Well, I have no writers room. Nobody writes any of my work. I write it all. Why am I telling you this? I wrote all of these scripts by myself in 2019. Work ethic!”

Last week before the film’s debut, Perry attempted to clear up the remarks during an interview with Level stating that he had attempted to use other writers previously but was unhappy with the quality of work he received.

”At the time, I had a bunch of writers who were nonunion, and I was unhappy with every single script they wrote. They were not speaking to the voice. They just didn’t get it,” he said. “There was a Black woman lawyer I was negotiating with to get WGA [Writers Guild of America] writers on my show. I told her, ‘I can’t afford to pay those rates that every other studio pays. I need to structure differently.’ It looked like the deal was going to go through so I fired the four writers and prepared to hire new writers through the WGA. Now we’re a WGA show and I’m paying WGA rates. Scripts they’re turning in? Ratings are going down. So now I have to go in and give notes on how to rewrite them. And these are Black people.”

Although he personally refuses to utilize writers, he did reveal that he learned the importance of surrounding himself with creatives and decided to hire show runners with their own writers as a solution.

“We have four shows coming up with showrunners who will have their own writers and their own writers room,” he said. “There will always be opportunities at Tyler Perry Studios for writers. Always. But for these particular shows, my audience wants my voice.”

Despite the issues going on behind the scenes, it was the on camera appearance that left Tyler Perry being clowned via Black Twitter and after the cast revealed that the movie was shot in five days—Twitter let the roasts fly.

Things you can find in most Tyler Perry movies that I expect in #AFallFromGrace:

1. An aerial shot of Atlanta
2. A fine man in a bad wig
3. Cicely Tyson
4. A gospel choir
5. A dark skinned villain
6. A black woman suffering

This can also be a drinking game for viewers 21+ lol

While no one is discrediting Tyler Perry and his contributions to cinematic culture of keeping Black thespians employed, it goes without saying that it may be time for Perry to level up invest in a professional team of stylists.

Check out some of the most hilarious reactions below