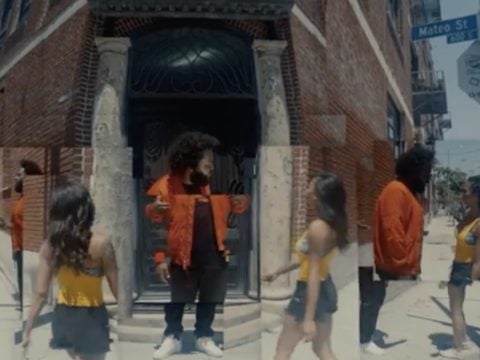 Dreamville’s Bas is keeping the focus on his recently released Milky Way album. The New York rapper comes through in a big way with his new “Fragrance” video.

In the video, Bas goes on an odyssey through the streets of Los Angeles with directing by filmmaker Paul Trillo.

With production from Pomp&Clout (J. Cole, ScHoolboy Q, Young Thug), the video for “Fragrance” follows Bas on an odyssey through the streets of Los Angeles and into the studio. The prismatic and perfume-soaked visual was directed by Paul Trillo, known for his work on such innovative videos as B.o.B’s “Back and Forth.”

“Fragrance” appears on Bas’s third album Milky Way, released via Dreamville/Interscope Records in August. Featuring appearances from J. Cole, A$AP Ferg, and Ari Lennox, the album has earned praise from platforms like HipHopDX (who hailed Milky Way as a “self-assured, eclectic mix of sonic elements that fit together with the ease of a children’s puzzle”) and Revolt (who called it “one of the most articulate, brilliant albums of the year”).

The post Watch: Dreamville’s Bas Goes On An Odyssey Through LA Streets In New “Fragrance” Video appeared first on SOHH.com.