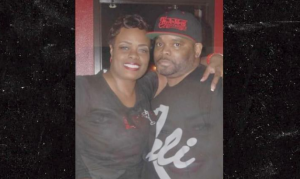 After the untimely death of Friday comedian A.J. Johnson, his widow appeared on TMZ saying that the comedian’s family was having financial difficulties planning A.J.’s funeral. She had to make a GoFundMe page to cover the costs.

A.J.’s widow, Lexis Jones Mason, talked about all the fake love in emails and phone calls she’s received but contends that she’s received little to no financial support from the same people in the industry that claim to love him.

“I did the GoFundMe, it’s $700 in there. A few of my friends CashApp me and I made that clear. I got like another 400, but no, it’s like you said, all of you say y’all love him…where’s the love? Y’all not helping,” Mason said. “I get the calls or inboxes saying y’all raising money. No, we’re raising money because I have to pay for this all out of pocket. I’m asking for help. But if I don’t get it, it’s fine because I’m not leaving my husband in there.”

Since the interview, Mason’s GoFundMe page has raised over $24,000. See the discussion below.