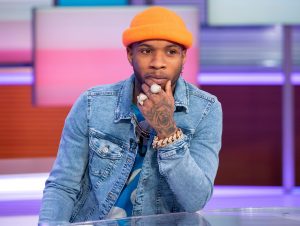 Tory Lanez is currently engaged in “meaningful discussions” to strike a plea deal with prosecutors in connection to his felony assault case with Megan Thee Stallion. Rolling Stone notes a Los Angeles Prosecutor told a judge this morning the talks could resolve the case.

Ta revealed the settlement must be reached by Nov. 3, if not, the preliminary hearing will begin. Tory’s lawyer, Shawn Holley, agreed to the court date.

“As in every case, the lawyers for the parties discuss the possibility of resolving the case. This case is no different. That said, our position as to what did and did not happen in this matter remains unchanged, and Mr. Peterson’s plea of not guilty stands.”

Last month, Lanez was in court in Los Angeles and had to post a bail amount to remain free while his court is pending. Lanez was found in violation of a restraining order Megan Thee Stallion has against him. The bail was increased from $190K to $250K, according to TMZ.

During the hearing, the judge would adjust his bail conditions to state that Tory can’t attend events where Megan will be. If he violates this mandate, he will be taken into custody.

In October 2020, Lanez was charged with the shooting of Megan Thee Stallion.