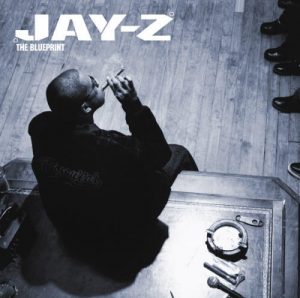 On possibly the world’s most tragic day in recent history (9/11), Hip Hop mogul Jay-Z released one of his best LPs, The Blueprint, on his own Roc-A-Fella Records imprint. The fall of the World Trade Center obviously overshadowed the release on that date, however, before the end of 2001, The Blueprint introduced Jay-Z as the head honcho of the game that we see today.

With a full-scale battle brewing between him and Queensbridge legend Nas, Jay utilized this spotlight to showcase his versatility, his ability to make mainstream hits as well as take on an MC or two that think he’s not qualified to sword fight on the mic. Even though it was polled in NYC by Hip-Hop radio station HOT 97 that Nas defeated Jigga on wax 58% to 42%, however, with Hov’s acquisition of the presidential position at Def Jam just a few years later, it sort of ended up being a draw with Nas as one of Jay’s artists.

Some of the memorable tracks from the album’s theme were “The Takeover”, the initial blow threw at Nas, the romanticized “Song Cry”, the sinfully soulful “Heart Of The City” and the epic “Renegade” track featuring Eminem.

Shout out to Jay and the entire staff at Roc-A-Fella for this timeless Hip-Hop classic!