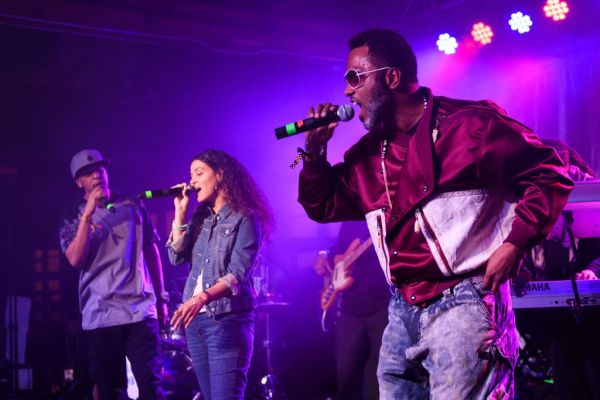 Blowout Comb, the second and final studio album from the Digable Planets, has reached the quarter-century mark of existence and improves upon the trio’s debut for several reasons we’ll cover in this piece. Beyond its dense production, muddied vocals, and pro-Black leanings, the record also retains its timelessness and kaleidoscopic lyricism.

A note from the author:

I usually steer away from injecting my personal connections to music in my writing, but it’s more so because I’m largely uninterested in reading myself wax poetic about the sounds I’ve enjoyed as it’s largely subjective. There is no reason for me to tell the reader how much this record means to me because then, it builds up an expectation that it might not meet. However, I’m compelled to share my experiences with Blowout Comb as I need to share why this album holds such a dear space in my heart.

Some who know me personally might know that I’m a member of the Five Percent Nation or the Nation of Gods and Earth, also known as “Five Percenters” and I won’t belabor that point. I also do not freely write about that part of my life in my writing because, once again, it’s not just a passing fancy, it has literally transformed my life.  I am devoted to our teachings like never before and relistening to Blowout Comb this year to place my mind back into 1994 has supported that effort.

Listening to this album, 25 years later, I feel emboldened, reinvigorated. When Ish raps, “My hero died in prison, George Jackson” on the song “Jettin’,” I still raise my fist just as I did the first time I heard it when I listened to this album on my Walkman riding home on the Red Line Metro train in Washington, D.C. One has to remember: this is the mid-90s and Hip-Hop was shifting away from its Afrocentric phase and moving into becoming a heavier cultural presence in America and across the globe. Hip-Hop fans saw the surging and focused lyrics from rappers in the East, while G-Funk was enjoying a prominent period in the west.

George Jackson is also a hero of mine. I read his 1970 book Soledad Brother: The Prison Letters of George Jackson when I was around eight years old. My mother, not at all an activist, did her best to instill Black pride in my sibling and I, and this book helped. To hear Jackson’s name via a music form I love more than any other, it was transformative. Adding to that, Cee Knowledge consistently “dropping jewels” — placing Five Percent terminology and themes in his rhymes — brought the whole project home.

Then, Mecca proved she was no slouch lyrically, sometimes outshining her two male musical partners. It is fair to say that my fandom of Blowout Comb easily makes it a personal classic and one of my favorite pieces of art ever created. I must end this here because I feel compelled to walk you through every emotion I’m feeling and there’s a lot to cover here.

And I still don’t know what a creamy spy is.

Blowout Comb was released on October 18, 1994, just as Fall was taking hold on the East Coast. The group’s debut, Reachin’ (A New Refutation of Time and Space), was a Jazz-inflected breezy affair that was pushed to the forefront of the industry on the heels of its huge smash hit “Rebirth Of Slick (Cool Like That),” which earned the trio a Grammy for Best Rap Performance by a Duo or Group. The follow up was an abrupt shift in sound. Ishmael “Butterfly” Butler, Craig “Doodlebug” Irving best known as Cee Knowledge, and Mary Ann [Khalilah-Azraa Vieira] “Ladybug Mecca” Vieira, all sharp rhymers with distinct styles, saw their voices sunk deeper into the mix to the point one would need to lean in to catch every reference.

From the onset of the album, the opening track “The May 4th Movement Starring Doodlebug” set the tone early. Mecca leads the song’s chorus and potent opening verse:

Now, sixteen times for the mind thieves/For my thinking Intel, I am Erica/Counterfeits don’t stop the wettest of us/We Brooklyn we define the black people equal to who, yeah/What you supply/I know when I know when I drop dip/That was in beetle’s but a snake try to spill a score/On my pride I’m in my Cammy/We bust at COINTELPRO we creamy like/F*ck that we Creamy Spies tell you scheme-y lies/We let our creamy bullets fly/Should it reflect the sun/We say yes when we think of gettin’ dipped/We says guess say yo comrades rest

The presence of unabashed Black pride was blunted somewhat by the warmness of Ish, Mecca, and Cee Knowledge clear-eyed if subdued vocals, which matched against some of the energetic production, it shouldn’t have worked considering Hip-Hop’s aggression during this period. But it succeeded according to many critics during its initial release.

The album’s lead single, “9th Wonder (Blackitolism),” was a reintroduction. If fans and critics were expecting “Cool Like That” part two, they were in for a shock. The video for the single is cinematic, showing a much Blacker Brooklyn than what exists today. Ish strolling through the borough as he ascends to the graffiti-tagged Dean Street MTA station stop, complete with his afro boldly picked out complete with a Black pick, remains just as resonant today as it did then.

As strong as Ish and Cee Knowledge’s verse were, Mecca’s closing verse also highlighted something that was sorely missing in Hip-Hop then and just correcting itself now: Black women featured as prominent fixtures of the culture. At the end of Mecca’s verse, her call and response with DJ Jazzy Joyce was a pleasant rarity as their routine and Jazzy Joyce’s focused cutting and scratching take the song out.

None of the members of Digable Planets were natives of New York. Ish hailed from Seattle, Wash., Cee Knowledge was from Philadelphia, Pa., and Mecca was raised in the Washington suburb of Silver Spring, Md. Ish and Knowledge met in Philadelphia, while Knowledge struck up a kinship with Mecca in Washington when he attended Howard University. Knowledge also crossed paths with some members of Washington, D.C.’s Hip-Hop elite in the late Father Lord of Actual Facts, better known as Tha Beggas, and that connection is made known several times over the course of the trio’s two releases.

Brooklyn, then, similar to Baltimore with The Wire, is just as much a character or group member on Blowout Comb. The transplants voiced pride in living in the New York borough, to the point one would believe that the group’s formative years were spent there. Production on the album also figures heavily in how the project should be absorbed, shifting between dusty looped samples and live instrumentation so seamless that it is hard to tell when the shift from man to machine happens. There is also the heavy influence of the Black Panthers and straight-up Black nationalism. Again, this may have been the last gasp of Afrocentrism in Hip-Hop on a grand scale, and it never once felt overbearing.

Headphone Hip-Hop isn’t an official team, far as we know, but if it were, Blowout Comb would be the shining example of it. With the muted deliveries from the group, the panning of vocals, and the aforementioned murkiness of the mix, repeated listens will uncover new treasures over time. In comparison to the clean mixes of modern-day Hip-Hop, audiophiles will spend more time picking apart the auditory flaws instead of experiencing the moment.

The years have been kind to the songs the members wrote when they were wide-eyed yet talented twenty-somethings. After mending their professional rifts and exploring creative endeavors outside of what made them notable artists, Digable Planets have reunited and are delivering their sound to crowds around the globe.

Blowout Comb is Black, bold, and Brooklyn beautiful. Still. And if musical art of high quality and value truly does live forever, it will always remain as such to anyone who approaches the album.