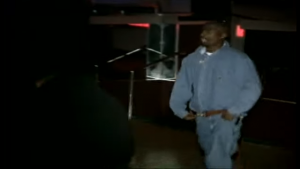 From classic movie scenes to powerful messages to iconic outbursts that have influenced some of the biggest names in today’s Hip Hop, moments from the life of legendary recording artist 2Pac go viral daily.

While today is no different, a clip that shows the groovy side of the thespian two-stepping inside a nightclub in 1995 to the West Coast classic “Let’s Play House” by Tha Dogg Pound goes viral on Tuesday (Oct. 12). “He was so gangsta,” tweets @Meanie_McFeeny on Twitter in the comment section of the 13-second clip.

Posted on October 12 by the popular social media account, @AuxGod_, on Twitter, the tweet captioned “Tupac dancing to ‘Let’s Play House’ (95)” has generated 52,000 views, 2,466 likes and 714 retweets — so far. The clip stems from rare footage of 2Pac at Club 662 in Las Vegas. The one-time nightclub was owned by Suge Knight. You may watch the full video of Shakur dancing on the packed-out dance floor below.

In 1995, the rapper-actor was shot five times during the New York robbery that spawned the infamous beef with best friend-turned-bitter rival Notorious B.I.G. and sentenced to up to four and a half years in jail for sexual abuse. His third album, Me Against the World, was released in March 1995 via Interscope/Jive Records. While in jail, 2Pac signed a multi-album deal with Death Row Records in September 1995.

On Death Row, 2Pac and Tha Dogg Pound collaborated on the track “Got My Mind Made Up” off the Diamond-selling Death Row debut All Eyez on Me. On the album’s production, Daz Dillinger produced “Ambitionz az a Ridah.” Tha Dogg Pound left Death Row in 2001.

You can revisit the visual to the Dogg Pound classic below.

The post A Clip of ‘95 2Pac’s Gangsta Boogie To “Let’s Play House” Goes Viral appeared first on The Source.

Twenty-five years ago, in 1994, Dr. Dre and Suge Knight’s record label was giving the mainstream music world an electric charge from the streets of Los Angeles. 1992 saw Dr. Dre’s solo debut, The Chronic. Eleven months later, Snoop Doggy Dogg presented his style with a game-changing D*ggystyle LP with Dre and his would-be star ensemble at the helm. By 1994, Death Row was diversifying out of growth and necessity. Snoop Dogg was mired in legal woes, related to the fatal 1993 shooting of Philip Woldemariam. At the same time “Murder Was The Case” became a D*ggystyle highlight, art imitating life seemed grave for Rap’s breakout star. With The Lady Of Rage recording, Dr. Dre and Ice Cube reportedly laying out plans for a Helter Skelter duo project, and R&B singer Danny Boy joining the fold, Death Row took time to feature its deep benches on two soundtracks. Early in ’94, it was Above The Rim. That uncontroversial effort showcased the chemistry between Nate Dogg and Warren G, Snoop’s former 213 band-mates. Rage flaunted her “Afro Puffs” over hardcore Dre production. Meanwhile, Tha Row made alliances with outsides, including Tupac Shakur and Thug Life, SWV, Al B. Sure, 2nd II None, and Jodeci’s Devanté. Later in ’94, the Murder Was The Case soundtrack had another vibe entirely. Snoop Dogg Reveals The Original Beat For Nuthin But A G Thang & Raps To It Dre executive produced the soundtrack to the short film he directed with Fab 5 Freddy. Like the legend of Faust, the VHS movie chronicles Snoop Dogg making a deal with the devil, following the narrative of the song. Dre produced four songs on the project which was eventually released on red-and-green vinyl for Christmas, 1994. However, apart from Dre’s ushering in of Sam Sneed, the lone Helter Skelter glimpse (“Natural Born Killaz”), a fresh title track remix, and Jewell’s Isley Brothers cover, it was a DPGC party. The soundtrack would be a launchpad for Tray Deee, who eventually became one-third of Da Eastsidaz. Nate Dogg had a solo cut. Names like Lil C-Style, Swoop G, and Slip Capone made breakthrough appearances, as Soopafly worked with Daz and Dre behind the boards. Tha Dogg Pound, who would be the next out the chute, care of 1995’s Dogg Food, made some of the biggest noise. While DJ Quik’s pre-Safe + Sound inclusion of “Dollaz + Sense” took rugged aim at MC Eiht and Compton’s Most Wanted, Dat Ni**a Daz and Kurupt took swipes at others in the industry with far newer beefs. Snoop Claims Biggie Tried To Have Him Shot & Explains How They Made Peace (Video) “What Would You Do” was widely regarded in the Hip-Hop world as a response to Eazy-E’s damning diss of Dr. Dre on 1993’s “Real Muthph*ckkin G’s.” Eazy had brought along Compton rappers B.G. Knocc Out & Dre’sta for the song which outed Dre and his new roster as “studio gangstas.” Although Snoop took swipes at N.W.A.’s founder on The Chronic, this was the stage for Death Row’s loudest response (following some notorious radio calls on Los Angeles airwaves). At the intersection of beef and music marketing, Tha Dogg Pound inherited the growing conflict. “Motherf*ckers out there be, like, takin’ our styles, be tryin’ to do they own little dissin’. But they can’t do it, you know. So we gonna do it like this. Sit back relax and get a cool one,” Daz announces over the eerie beat at the top of the track.

Later in the song, Daz goes at B.G. and Dre’sta, mentioning their name on wax. Meanwhile, in the video, recreating O.J. Simpson’s June of ’94 Bronco ride down the 405 freeway, there are jabs at So So Def Records. An actor in an Atlanta Braves jersey playing Jermaine Dupri is mobbed at the top of the video. Later, an actress imitating Da Brat gets the cold shoulder from the DPG crew. Several months after Funkdafied nearly cracked the Top 10, Death Row felt as though the braided Chicago spitter in the flannel with the G-Funk production was biting. Kurupt Explains How He & DMX Made Peace 20 Years After Their Beef Over Foxy Brown (Video) Daz took umbrage with labels picking up local acts. Def Jam had signed Warren G after Death Row didn’t. The G-Child became a grown star. Def Jam had also scooped up Domino, Jayo Felony, and would eventually back B.G and Dre’sta. “I see all these ni**as tryin’ to get with my kinfolk / Got so many busters on the West Coast / And then, to say the least / I see a few trick-ass ni**as layin’ low on the East Coast,” D-A-Z charges. The year before many people claim the coastal conflicts started, Daz Dillinger was unloading what was on his mind regardless of who was offended. Kurupt follows, taking jabs at Ruthless Records and welcoming a physical altercation—which for Nate Dogg and others, would eventually happen, at a nearby charity golf outing. Nate took on B.G. and Dre’sta in an altercation that is partially captured on camera. Ironically, JD would go on to sign Daz Dillinger a decade later and executive produce 2006’s So So Gangsta. In the early 2000s, Dre’sta would work with Death Row on the label’s Too Gangsta For Radio compilation. Other Ambrosia For Heads Do Remember Features However, as Snoop, Daz, and Kurupt told the world that their crew could not be messed with, the song was a powerful statement that the ever-territorial Dogg Pound was poised for 1995. Additional Reporting by Bandini.