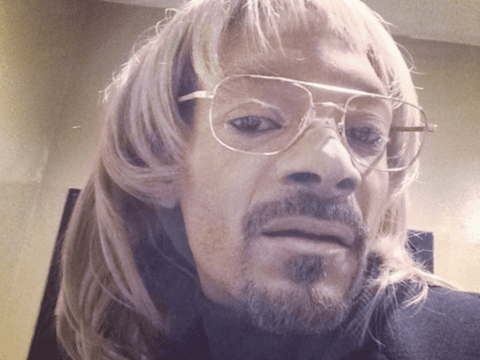 West Coast rapper Snoop Dogg is feeling the same pain 50 Cent goes through. The hip-hop veteran has reacted to his signature face getting turned into a hilarious new street mural.

This week, Dogg hit up social media to share the latest artwork by painter Lushsux. Snoop even hit up Fifty to get his take on the must-see masterpiece.

Earlier in the week, the viral artist revealed a group of people recently attacked him on the street. The assault ultimately landed him in the hospital for trolling Fifty. He also said he’d found himself in multiple fights with other people.

“50 seems to want some more walls? Unfortunately some 6 or 7 smoothebrains at one time on the street already put me in hospital already this month because of this sh*t. I dont like to bring up all the bad stuff I have to deal with just to paint some ha ha funny you laugh now images on walls but I guess now is a chance. I constantly have to unwillingly fight people ( among other insane sh*t you would not believe even if I told you ) on the street who for whatever cooked reason seem to feel the need to come up to me at a wall and start trouble. It’s tiresome, but it will not ever stop me doing what 99.8% of what everyone else seems to for the most part get a hearty chuckle out of, because they aren’t sociopathic pieces of sh*t.” -Lushsux’s Instagram

Earlier this week, the hip-hop heavyweight reacted to getting painted into boxing icon Mike Tyson and shared the hilarious must-see mural. It seems like people might have taken his caption to heart though.

This guy need a a** whoopin bad, he still doing this sh*t. #STARZ#BMF” -50 Cent’s Instagram

In late April 2020, the G-Unit boss let loose some major steam on getting trolled across the Internet. The rap entertainer playfully ripped the mystery person behind his now trending troll-inspired murals.

man look at this sh*t, TF is wrong with this guy he won’t stop

The post Snoop Dogg Gets Trolled By 50 Cent’s Street Painter: “Is This The Same Artist That Be F***n W/ U?” appeared first on . 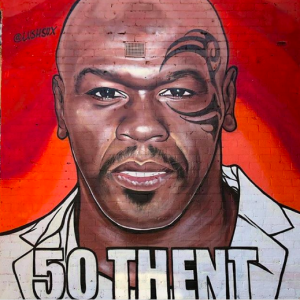 An Australian street artist has been painting some really “creative” images of 50 Cent and the G-Unit general isn’t too happy about it.

Earlier this month, the muralist painted an image of Fif’s face with disgraced rapper Tekashi 6ix9ine’s rainbow braids and tattoos. Once 50 got wind of that, he was ready to take it to LushSux’s front door.

“i’m sick of this s**t, he think i can’t find his ass in Australia. i’m a have a knot put right on his f**king head,” said the Hip Hop mogul about LushSux.

Since then, LushSux has painted another mural of 50, with his face on the head of Mike Tyson. Under the image, it says “50 Thent.” 50 took to IG with a pic of the painting, responding, “This guy need [an] a** whoopin’ bad, he still doing this s**t.”

The post 50 Cent: Street Artist LushSux Needs An A** Whooping Bad appeared first on The Source.