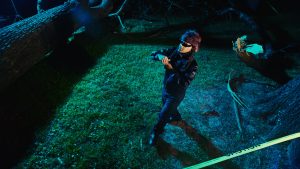 Joony from Maryland is “Drifting In Tokyo” in his video. His first official single off his upcoming album, Pretty In Black, is “Drifting In Tokyo.” The “Baby Joon” rapper swerves through the city while dripping in fancy clothing in the Fast and Furious-inspired clip. As usual, Joony may be spotted watching TV with attractive women making donuts in an empty parking lot.

Over the last few years, the burgeoning rap sensation from the District of Columbia has made huge ripples in the business. Many people have backed him because of his outstanding work ethic and constant productivity, including GRAMMY Award-nominated R&B singer Brent Faiyaz. Furthermore, his new single follows his highly anticipated performance at Washington, DC’s Broccoli City Festival. Joony will be performing with some of the biggest names in music, like Lil Durk, Summer Walker, and DMV icon Wale.