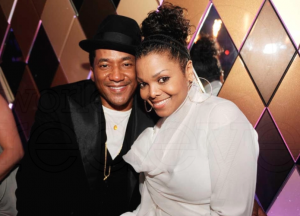 In an exclusive interview with famed battle rapper Math Hoffa, actor and A Tribe Called Quest front man Q-Tip talked about his romance with culture icon Janet Jackson. Tip spoke in depth about how he met the youngest Jackson sister and how the two eventually started dating in the late 90s.

The ATCQ founder says that the two met on the set of Poetic Justice and even reveals that we was originally set for the role of “Lucky” that was played by Tupac, but ended up locking in the role of Janet’s boyfriend. When the two later connected on the 1997 single “Got ’til It’s Gone”, they began dating shortly thereafter.

The post [WATCH] Q-Tip Opens Up About Past Relationship With Janet Jackson appeared first on The Source. 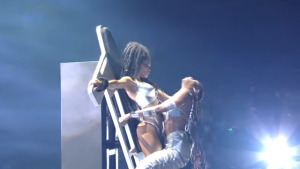 There was spice on the MTV VMA stage Sunday night. At the end of her “Wild Side” performance, Normani gave homage to Janet Jackson with an on-stage lap dance to Teyana Taylor, strapped into a metal stand.

The “Wild Side” performance was already sizzling, but the closing moment set Barclays Center on fire.

Fans were quick to point out the moment was a nod to Janet strapping a man to a chair for a lap dance during her 2002 tour. You can see both the inspiration and Normani’s performance below. 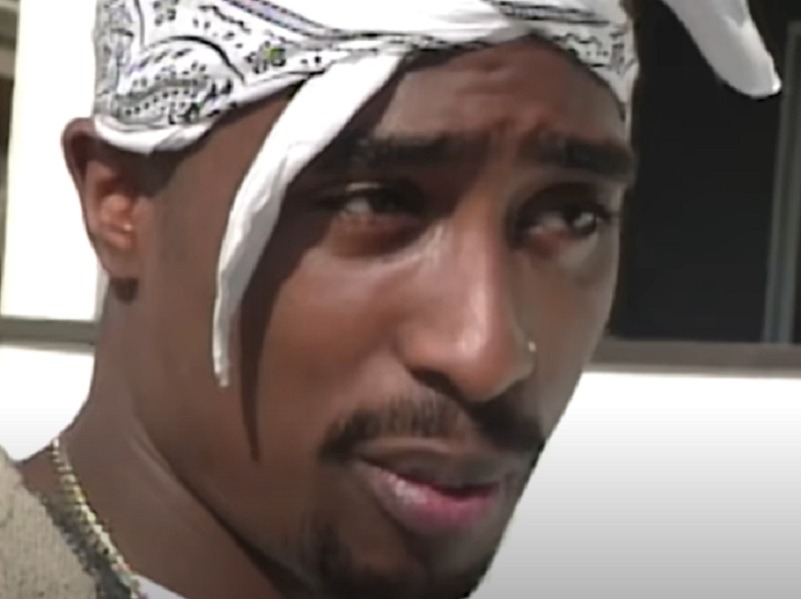 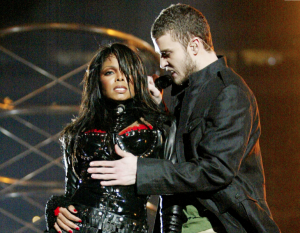 Janet Jackson’s infamous “wardrobe malfunction” at the 2004 Super Bowl will reportedly be turning into a documentary.

The production company stirred up quite a bit of controversy with their Britney Spears-centered project which highlighted her past relationship with Justin Timberlake, questionable conditions of her conservatorship, and how her relationship with the media shaped her image.

JT, who offered an apology after the documentary put in perspective how his words weaponized the young singer at the time, might be in the hot seat once again after this drops.

Costumer designer, Wayne Scot Lukas, who designed Janet Jackson’s outfit the night of the 2004 Super Bowl, alleged that the lead NSYNC singer planned the entire “wardrobe malfunction” to outshine Spears and Madonna kissing at the VMAs months before that.

The post Janet Jackson’s Notorious Super Bowl Incident Is Reportedly Set To Be Turned Into a Documentary appeared first on The Source.

With a Whitney Houston biopic currently in development, we will have another icon getting the big-screen treatment. TheJasmineBRAND details auditions for a Janet Jackson biopic were being held before the coronavirus pandemic hit.

A Janet Jackson film could incorporate many phases in her life ranging from her roles in sitcoms during the 1970s and 80s like Good Times and Diff’rent Strokes, her music dominance that led to numerous platinum certifications and more.

Jackson’s 2019 residency pulled in $13 million and she was set to release a new album in Black Diamond, which would be supported by a tour of the same name. Those plans appear to hit a snag due to the pandemic, with details of rescheduling or adjustment scarce.

A month ago Jackson alluded to the launch of her tour stating: “Can y’all just stay inside? I got s-t to do in June. She was also supposed to headline the 2020 Essence Festival of Culture in New Orleans during the Fourth of July weekend. That festival is canceled for this year.

Jackson issued a message to essential workers earlier this week thanking them for their efforts.

The post Janet Jackson Biopic Was in Development Prior to Coronavirus Pandemic appeared first on .

While the world is cocooned up in their homes, many of them on lockdown, DJ D-Nice has been working to bring people together through a free concert!

Perhaps, they were pandering to the over 100K people jamming in harmony to the BDP alum’s spinning of James Brown and Rihanna hottest tunes.

Whatever the reason, it proved once again the power that Hip-Hop yields.

Let’s make sure we take that power to the voting booths or the absentee ballots this November… regardless of who the candidate is.

A partial list of others in the party are as follows:

The attendees show how diverse the crowd was, ranging from musicians, politicians, and influencers. Sororities, Fraternities, HBCUs and just all-around music lovers flooded the comment sections with stars to salute the health care workers still looking out for those affected by the COVID-19 disease that has afflicted the world.

He also did several tributes to Stevie, Janet, Patti, and Chaka. However, it was a double dose tribute to Kenny Rogers that touched many. Rogers transitioned earlier in the day.

There will also be another one that raises money for those hurting during this time. Rap music and those who love will heal the world… best believe it. 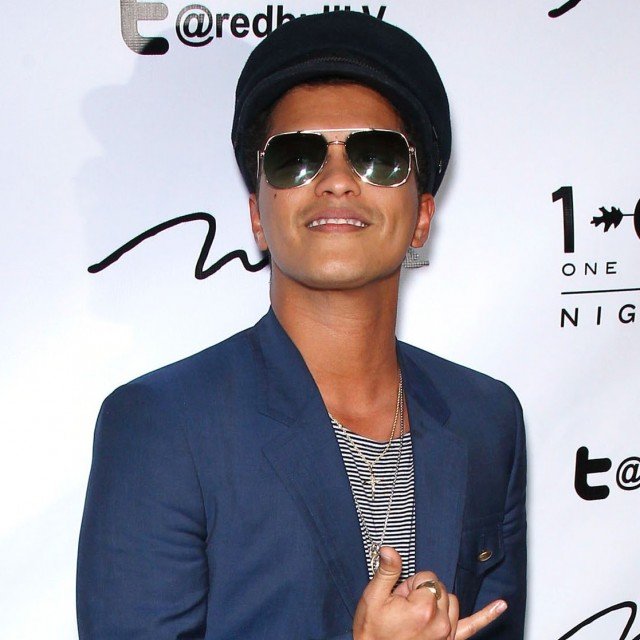 If you haven’t bought your package to attend the 2020 Essence Festival then you need to get your life in order. The talent has been announced and it is poised to be a special vibe.

Billboard Magazine is reporting that that the acclaimed periodical has confirmed their performers for their upcoming New Orleans based affair. According to the article Bruno Mars and Janet Jackson have been named as the main stage headliners. Both singers confirmed the appearances via their respective Instagram accounts. This will mark the first time Bruno will touch the Essence stage and as of now will be his only festival booking for the 2020 calendar.

NOLA! ITS ON! Get your tickets at Essencefestival.com

In addition to Bruno and Ms. Janet other artists will be bringing their talents to the three-night concert series including Janelle Monae, Patti LaBelle, Raphael Saadiq, Elephant Man, Summer Walker and Swizz Beatz.

This year Essence Festival will extend their programming from three to five days. Michelle Ebanks, CEO of Essence Communications, Inc. detailed the brand’s enthusiasm for 2020. “To be able to say that at 50 years, we are black-owned, diversified across media, technology, commerce and live events, and impacting our culture in new and even deeper ways than ever before is a blessing – and one that comes with a tremendous responsibility to our community to continue to evolve, innovate and transform. That remains our focus and commitment as we work to ensure that we are here serving black women deeply and advancing black culture”.

The 2020 Essence Festival of Culture will take place from July 1 to July 5 in New Orleans. You can purchase tickets here.

Janet Jackson is set to release a new album, Black Diamond, with a supporting tour.

The announcement reveals the new album will come later this year and will be played in venues across Chicago, Philadelphia, Atlanta, Los Angeles and more before taking off for Europe.

“Hey U Guys! I’ve heard all your wishes and now from my lips to your ears. I’m working on my new album and going on a brand new World Tour this summer!,” Jackson wrote to fans on Instagram before revealing the Black Diamond title.

“Black Diamonds are the toughest of all the diamonds, the hardest to cut. I see that as the hardest to hurt or destroy. There is a lot that I have endured. I see myself as a Black Diamond in its purest form. I’m a rock, I have ruff edges but I keep moving forward. I want to show you my strength as well as give you strength.”

Jackson’s tour comes after a successful residency in 2019, which brought in $13 million.

Tickets go on sale to the general public starting Thursday, February 13 on LiveNation.com. The full list of dates is available in Janet Jackson’s post below. 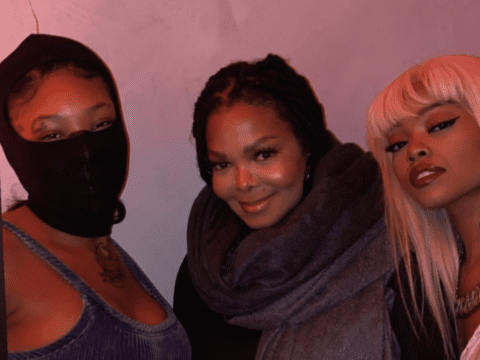 R&B singer Summer Walker is cherishing epic moments. The popular crooner went online this week to share pics and footage of herself turning up with veteran musician Janet Jackson.

Big Facts: On Sunday, Walker went to her Instagram page to unload a grip of must-see content alongside the living legend.

High-Key Details: On Friday, Walker went online to share past flirty messages between herself and publicized boyfriend London On Da Track.

Wait, There’s More: Back in November 2019, London shared a boo’d up shot of himself and Summer on a boat together.

Before You Go: Recently, Walker came through with her must-hear new “Yummy” remix with Justin Bieber. 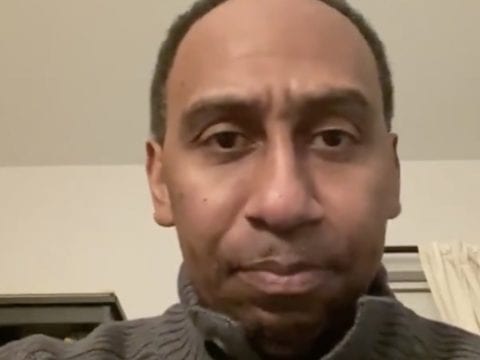 The Internet remains undefeated. Social media has come forward to deliver some hilarious contributions to a now-viral #DollyPatronChallenge movement from ESPN’s Stephen A. Smith and Janet Jackson to pop star Miley Cyrus. Look and comment below!