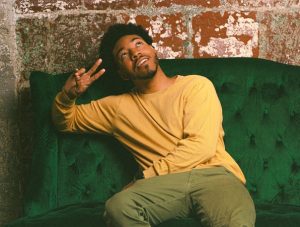 Allow me to re-introduce myself.

Weird Al Yankovic, Lil Duval, Mike Epps, and most recently Kountry Wayne – as his alter-ego Drip – there’s a well-documented history of successful comedians-turned-recording artists. And with his skits buzzing at a fever pitch right now, it’s clear to see that next up in the long-running transition is New York-based comic David Shine.

A comedic style that is energetic, goofy, with a dash of intelligence. Entering the game in 2014, Shine accrued a grassroots following with a unique intelligent sense of humor, original social media sketches, and trendy antics that have gone viral on multiple occasions. Due to his popularity, Nick Cannon enlisted Shine as a cast member of season 14’s popular variety show “Nick Cannon Presents Wild’N Out.”

After being spotlighted on one of the biggest stages in today’s comedy, David Shine seized the opportunity and knowledge to elevate his skills by adding his love for music to the comedy and began dropping music videos. “Dad Now” (2018) was the rising star’s debut music video, and generated over 32,0000 views; however, it wasn’t until his trendsetting visual for “Stud Luv” went viral the following year was it solidified that Shine ascended to the next up.

Like the comics-turned-entertainers before him, David Shine’s parodies, music videos, and stand-up skyrocketed during the pandemic, which has, professionally, made 2022 his biggest year yet. And not slowing down, Shine continues to rise using the same productivity and charm – equipped with newfound star power.

For daily updates on everything David Shine, follow him on social media.