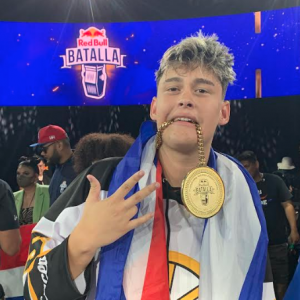 This weekend in the City of Angels, the best of the best Spanish-speaking emcees met under the roof of the Sunset Las Palmas Studios and battled it out for the champion title of the U.S. in the Red Bull-powered 2021 Batalla competition. Out of the sixteen Hispanic slang spitters, only one could walk away with bragging rights and the winner’s gold rope and this year Orlando’s Reverse walked away with the title.

Donned in a LACED 3.5 custom made jersey/hoodie, Reverse brought the same energy from the very beginning as he was the first to set it off on the mic in the competition against OG Frases, who Reverse took out in a unanimous decision. He then swiftly took down El Poeta to move himself into the semifinals. The Orlando native faced Tijuana born/Texas bred Betho, who proved to be difficult comp for all of his opponents, prompting several sudden deaths or “replícas” as they were dubbed in Batalla.

Last year’s top contenders El Dilema, who was eliminated in the first round and Jordi, who lost to Venezuela’s Eckonn in the quarterfinals, were proof that even amongst the best, the competition was almost impeccable compared to last year. El Dilema lost to Cuba, who repped his country to the fullest, losing only to the night’s king of the mic, Reverse.

Salute to all of the competitors of the night and look for Reverse to rep the U.S. in the Batalla World Finals.