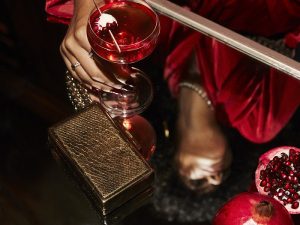 Sean Diddy Combs and CÎROC are continuing the #CIROCStands initiative to support Black excellence and achievement with the new campaign #CIROCStands for Black Business. The new program amplifies the stories and successes of local businesses and their owners in a digital content series and billboards in their city. Also, each ground-breaking female founder will be paired with one of CÎROC’s Black Executive partners, who will provide mentorship.

Angela Yee kicked off the New York City series, which will host and visit three women-owned businesses in Harlem and Brooklyn. Joined by Emmy-nominated photographer/videographer Steven John Irby, Angela spoke to business owners to explore their stories and spirit of entrepreneurship and celebrate their dedication and hustle.

In addition, CÎROC has announced a new, limited edition product, CÎROC Pomegranate! The new CÎROC features Notes of juicy red berries with hints of strawberry, melding with bursts of sweet and fruity pomegranate flavors, culminating in a silky-smooth finish perfect for mixing in your favorite cocktail.

CÎROC Pomegranate is available nationwide in October for a suggested retail price of $29.99 until supplies last.