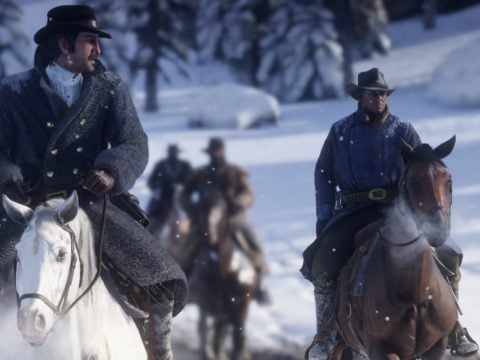 According to Rockstar Games, Nasty Nas and elusive singer D’Angelo add their signature touches to the Western game.

All of the vocal moments in Red Dead Redemption 2 are produced entirely by Grammy Award-winner Daniel Lanois, known for producing albums for Bob Dylan, Neil Young, and Willie Nelson as well as collaborating with pioneering musician Brian Eno to produce several albums for U2 including the multi-platinum The Joshua Tree. In addition to Lanois’ production, the soundtrack features additional vocal performances from a range of award-winning artists including D’Angelo, Willie Nelson, Nas, Rhiannon Giddens, Josh Homme, plus an additional track written, produced and performed by David Ferguson. All songs for both the score and soundtrack were created exclusively for Red Dead Redemption 2. (Rockstar Games)

D’Angelo low-key delivers an audio gem with an unexpected new song on the soundtrack.

The R&B singer’s contribution is called “Unshaken” (full title: “May I? Standing Unshaken – Oh Traveller Have a Seat”). The song wasn’t officially listed in the credits for the Red Dead Redemption 2 soundtrack, which boasts the likes of Arca and Colin Stetson, but was discovered by close listeners between “Paradise Mercifully Departed” and “Dear Uncle Tacitus” missions in Chapter 5 of the story, as MissInfo points out. (Consequence of Sound)