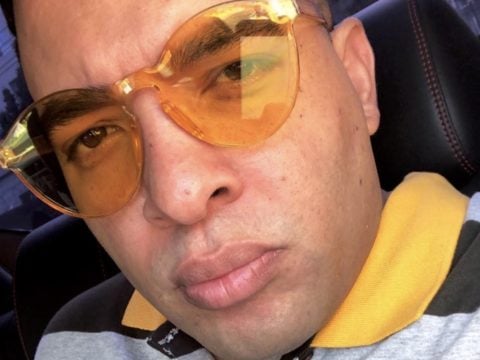 Radio host Jason Lee isn’t here for getting his name dragged. The hip-hop personality has stepped forward to speak out on having shots fired his way in the suddenly personal feud between Nicki Minaj and Cardi B.

Lee went to Instagram Monday (October 29) and appeared to side with Cardi after getting ripped on Nicki’s Queen Radio show over alleged allegiance.

Nothing but facts. You know what’s sad, I haven’t been responding to anything until today. @rah_ali I know you don’t have many friends but I really considered you one. You were one of the few people I talked to when I came in town, you’ve asked me numerous times to stay at your place in Jersey (Thank GOD I never did) EVERYONE WARNED ME NOT TO TRUST YOU! All this time i thought you had haters and it was God speaking through people. YOU introduced me to @nickiminaj AND when her and @iamcardib got into the fight during fashion week I called you and told you we 1. Needed to not let this get between our “friendship” AND 2. Do whatever we need to do to stop it from escalating. You told me you thought I was biased but then go on and interview an intern i met 4 times about me being a BOSS. All my employees who were here then are still here and ain’t going nowhere because I’m teaching them how to become their own boss. You found an intern with bad bundles who was let go for plagiarizing stories to create lies then used your struggling platform to try and discredit me. Sorry them fashion nova checks stopped coming, heard you weren’t representing the brand well.

Then i see the internet has you down as Nicki security

Protect your brand you’re smarter than this. Lastly, I’m working so I can’t fully respond but I’m sure you’re the one who leaked my number. Thank god it was the trap phone (changed it). I’ll be responding with more receipts later. (Swipe left)

I’m called “fake” every day by the barbz terrorist group. Here’s the crazy part – I WAS A NICKI FAN! Here’s where nicki got mad. On one of my shows I said @karencivil used to call me (and all the other blogs) and ask us to post positive photos of nicki. No shade, it was her job. I did at first until I realized there was no benefit to doing so. If you’re gonna pay someone to ask blogs to write about you there should be some trade off or pay them like everyone else does. Then everyone saying I was fake for sitting front row at @marcjacobs show couple seats away. @chardefrancesco asked her if she was ok with her seat and she said yes. She had a chance to move or ask for me to be moved and she didn’t. No, I didn’t “confront her” because it’s not my job to nor was it the place to discuss. Nicki has been invited to my show and has not responded. Nicki saw me and said nothing yet goes on Rahs lame ass show that she begged my managing editor @jeroslyndiva to promote and left comments that she was gonna “get into some thangs”. She said this during the interview with bad bundles. You’re a superstar. Why you worried about me. I know she blocked me so she can’t see this. I know you gave me cock sucker of the month today. Made my day. Ima save my response for a video ima edit.

. Lastly, I love @iamcardib and although i would take all her money to post about her I have never been asked to post anything for her AND would never accept it. I just love my friend and it’s sad how many friendless people can’t understand that. More to come… (swipe left)

Despite all of the tensions, Cardi and Nicki might have already chose love over feuding.

Lee is known for flexing his love and admiration for Cardi across his IG page.

I’ll never stop showing love for those who love me. This past week @iam_kingpee and I have been plotting on this surprise bday party for @iamcardib and thanks to our friends at @ciroc and @fashionnova it was a success. The fact that we pulled it off without people ruining it on social media was amazing. Surprising her with her family, watching @offsetyrn drown her in diamonds, and seeing her smile all night shows we must’ve done something right. Thank you @carverguru for allowing me to drive him completely crazy this week! Hope you enjoyed your night @iamcardib!

I’ve been a fan of yours before the music and I’m happy to call you my friend. You’ve been supportive of me privately and more importantly publicly. You’ve been an example to young women how they can have it all at the same time and I love watching you with your daughter. Today is your day and I hope you’re living your best life. Happy birthday @iamcardib

Nicki initially let loose on Cardi B with a slew of accusations following her Monday radio broadcast.

For the slow ones in the back on the blogs, I offered money for the footage from the venue. I have footage on my own camera but I was asking for the overhead footage that the venue may have. #QueenRadio. Y’all listen to snippets of my show & think y’all Albert Einstein. #DipVIDEO

Not gonna lie, I can’t stop watching the #DipVIDEO

btw, it’s not a rmx… it’s official. Thank you guys for another RECORD BREAKING #QueenRadio show! I wish you guys understood how much I love you.

The only rapper in the history of rap who can only talk about deals and songs she’s supposedly turned down cuz she can’t talk about a verse she’s ever written. Fkn fraud

I’ll pay you to take a lie detector test about every claim I made on #QueenRadio. You won’t. I must admit you’re a convincing liar. You looked me dead in my face & said you told ya man not to do the “no flags” video cuz I was dissing you. London on da Track got the same call.

Same thing with Steve Madden. Irv Gotti asked me to do that deal several times. I passed. You never hear me talking bout things like this.

she rlly thought she was doing smthn talking about turning down deals. BWAAAAAHAHAAAHAHAHAAAAA #DipVIDEO out now.

Her lawyer just called my agent threatening him for putting out the receipts.

Ok you guys, let’s focus on positive things only from here on out. We’re all so blessed. I know this stuff is entertaining & funny to a lot of people but I won’t be discussing this nonsense anymore. Thank you for the support & encouragement year after year. Love you.

Instead of staying mum, Cardi went on a massive rant exploding on Nicki.

Since you wanna talk about me

Since you wanna talk about me

Since you wanna talk about it

Since you wanna bring it up

Who needs Monday Night Football when you've got this??? lol

The post Radio Host Jason Lee Responds To Nicki Minaj/Cardi B Beef: “Should I Say Which One Of These Ladies Tricking Other Celebs Into Selling Kitty Cat” appeared first on SOHH.com.