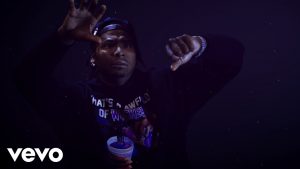 Moneybagg Yo gets a larger look, adding in the assistance of Lil Wayne and Ashanti to “Wockesha.” The original single features a sample of Wayne talking about his cup on the opener.

Back in July, the original received a video, highlighting the addictive nature of codeine and gives a real visual of Moneybagg and his purple cup, which he sees as a woman, but everybody else sees a floating cup.

The single became the format’s most-heard song in the week ending Aug. 22nd. The Memphis rapper has had quite the year of accomplishments, also taking the lead with the highest-selling rap album of 2021.

The latest numbers show that MoneyBagg Yo’s A Gangsta’s Pain sold 777,000 copies, the highest-selling album of the year.

You can check out the hilarious video, which also has a Lil Wayne cameo, below.

The post Moneybagg Yo’s “Wockesha” Receives a Remix with Lil Wayne and Ashanti appeared first on The Source.