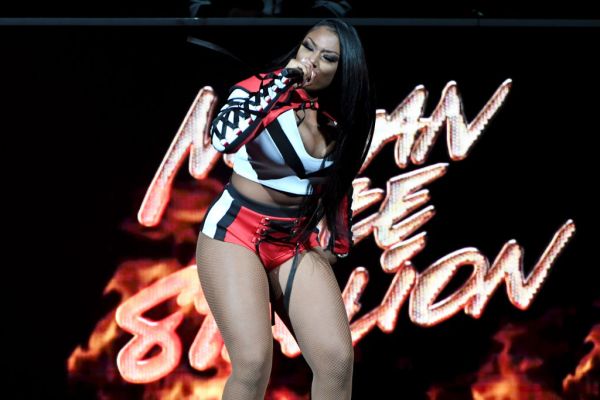 Toxic relationships are full of passion and heat, but can go left at the drop of a dime and Megan Thee Stallion is no stranger to such. The Houston star shared details of her 2015 arrest for fighting with an ex-boyfriend after discovering he cheated on her and fathered a child.

Megan hopped on Instagram Live to address a resurfaced mugshot stemming from the arrest. The Fever rapper explained that while attending SXSW in Austin, Texas, Megan, then a college student, says learned of the boyfriend’s activity while at a concert thus ending things on the spot.

She then explained that in the midst of trying to walk away from the unnamed man, who she says stood 6 foot 9 inches tall, he began “pulling and pushing” her as she tried to get her emotions in check. She then explained that the man took her phone and smashed it to the ground which sparked her to open up her hands on the boyfriend when cops rolled up, catching her in the act.

Police inquired if the man touched her but Megan says she kept the law off his back as she didn’t want him to go to prison but the tables got turned when the boyfriend screamed bloody murder after catching an eye jammy. Megan says she was arrested, cuffed, and hauled off to jail where she spent two days behind bars thus leading to the newly-surfaced mugshot. A glance at the photo does give off the impression that Megan was definitely in a tussle of some sort.

Check out Megan Thee Stallion explaining the details of her 2015 and mugshot courtesy of The Shade Room below.

TSR STAFF: Tanya P.! @tanyaxpayne ______________________ #Roommates, it looks like #MeganTheeStallion felt like she had some explaining to do after her mugshot from 2015 resurfaced. Meg hopped on live to explain a situation between her and an ex-boyfriend she had when she was 19. ___________________ Apparently, Megan was at #SXSW, and found out that same day that her manssss cheated on her AND fathered a child with a woman he claimed to have slept with only one time. Apparently, when Megan found out they began arguing and the dispute turned violent. _________________ She explains during the live, that the argument spilled into the street and people who were around called the cops. Unfortunately for her, when she began to swing at him, cops stopped her in her tracks and had more than enough evidence to lock her up! To add insult to injury, her former boo admitted that she— read more at theshaderoom.com