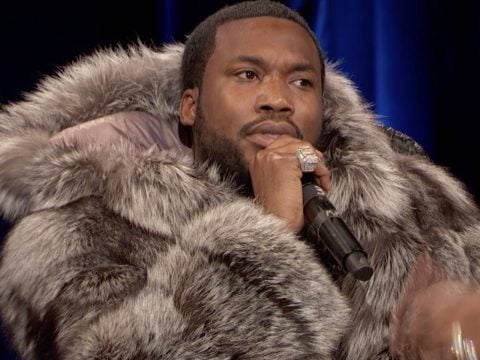 In a new interview, Meek Milly singled out the feds for going too hard on the rap rookie with massive accusations.

“You’re a product of your environment and I want to change that narrative. Even with Tekashi, he got the RICO. That’s what John Gotti got. We know he ain’t dangerous like no motherf*cking John Gotti. He was doing some sh*t, well, he was allegedly doing some sh*t and acting out a little bit. But the RICO? That’s kind of like bullying. They’re trying to give that kid life. You have anybody in here that thinks he deserves a life sentence? H*ll no.” (CRWN)

The feds wiretapped Jamel Jones — gang name, Mel Murda — a former member of 6ix9ine’s inner circle, who is now behind bars. During the convo, Jones says, “[Tekashi] is trying to dry snitch at the same time, homie. But he keep saying, f*** Treway, f*** that n****, Treyway. Ain’t no n****, Treway. F*** Treway.” Tekashi’s former manager Kifano Jordan, aka Shotti, responds with laughter and says, “Imma feed him though.” (TMZ)

The main issues appeared to stem from Tek wanting to distance himself from his entourage.

Tekashi’s former crew members were also recorded saying how Tekashi tried to separate himself from the Nine Trey Gangsta Bloods after firing his entire staff. The feds recorded an unnamed crew member saying, “That’s cool. Now he gotta get violated.” Jones replied, “Yeah, super violated. Super duper. Ain’t no much he could really do unless he run around with 100 armed securities all day.” (TMZ)