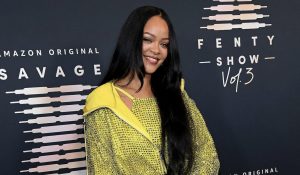 Rihanna’s Savage x Fenty fashion show is promising to be a star-studded event.  The 33-year-old mega star has released a trailer for this year’s show, which will feature Rihanna’s latest collection of lingerie.

According to an official press release, the upcoming Savage x Fenty collection and runway show are meant to evoke total “baddie energy” with pieces incorporating “strong lines that trace contours of the body and unconventional silhouettes that push the boundaries of individuality to bring out the baddie in everybody.”

The show will film at the Westin Bonaventure Hotel, downtown, Los Angeles. Watch the premiere Friday on Amazon Prime Video.

Check out some photos from the red carpet below.