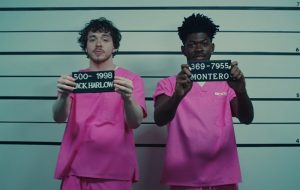 Lil Nas X has once again found himself on top of the Billboard Hot 100.

Lil Nas X’s “Industry Baby” single featuring Jack Harlow has hit the top of the chart. “IT TOOK A FEW MONTHS BUT WE HERE! THANK U EVERYBODY,” Lil Nas X wrote. “INDUSTRY BABY IS THE NUMBER 1 SONG IN THE WORLD! LESSSSSGOOOOOO!”

“Industry Baby” racked up 64 million airplay impressions, 23.2 million U.S. streams, and 34,000+ downloads in the past week. “Industry Baby” is Lil Nas X’s third No. 1 single following his debut “Old Town Road” and the controversial “Montero (Call Me By Your Name).”

The post Lil Nas X and Jack Harlow Take No. 1 Spot on Billboard Hot 100 appeared first on The Source.