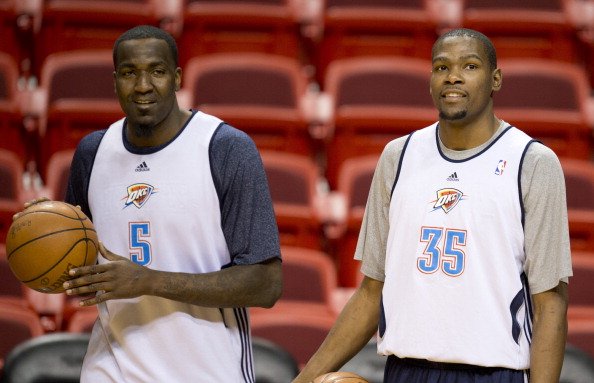 It’s been 3 days since Kobe Bean Bryant, his daughter Gianna and seven other passengers died in a helicopter crash. Bryant’s death had many of his NBA brethren not only mourning but reflecting on life as a whole and any differences they may have with friends.

Case in point, Kendrick Perkins, who’s dust-up earlier this month with former teammate Kevin Durant had social media buzzing. Perkins got Durant to react when he declared that Russell Westbrook was the best player to wear an Oklahoma City Thunder jersey. Even going as far as to point out that KD was the reason the Warriors were able to come back from a 3-1 deficit to punch a ticket to the NBA Finals during the 2016 playoffs.

In about 30 minutes I’m going to give my opinion on @SportsCenter on why Believe that Russell Westbrook is the best player to have ever put on a Oklahoma City Thunder Jersey!!! He is MR. THUNDER!!!

KD lost in the second round without Russ when I was there. So what that mean?

Durant, who is known to have very itchy Twitter fingers fired back, and he didn’t need his burner account to do so, pointing out how insignificant Perkins’ contributions were while they were teammates.

Yea and our starting center @KendrickPerkins averaged a whopping 2 and 3 during that series. U played hard tho champ lol

Weak is starting at center, playing real minutes with no production. Should’ve worked on your skills as much as I did

Then Kobe’s death happened, and Perkin’s took it very hard, and it seemed to put things in perspective for the NBA baller. In a tweet, Perk apologized to Durant, professing his love for his brother, basically giving him his roses while he is still here.

Just wanted to tell you I Love you my brother and whatever I did to hurt you I’m sorry bro and hope you forgive me!!! I love you bro real Talk! @KDTrey5

No word on if Durant has responded to Perkin’s apology, but the now Brooklyn Net did finally speak on Kobe’s passing saying it felt like he knew Bryant all his life and that it hurts to think about him no longer being here.

“I felt like I knew him my whole life. We see him grow up; we see him retiring, going into his second phase of life. It’s just so many people that are sad about this, and it hurts to even think about it.”

He further added that even though they faced off against each other 25 times during Bryant’s playing days, conversations with Kobe were very brief, but he did give Durant some great advice like “just put the work in, man.”

“Kobe didn’t really have any long-winded messages for me as a player; it was just quick, short gems. And he led by example — so he came in and worked, and you seen it.

We hope Kendrick and KD can put aside their differences, you never want your last words with someone to be on some negative ish.