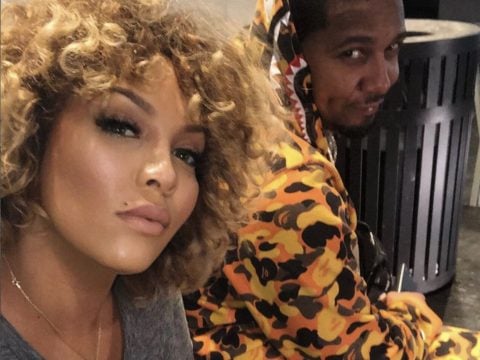 Santana went to Instagram Saturday (October 13) with some gushy born day love to his bae.

10/13 a real one was born!! It’s my birthday today & even tho this year is different I’m happy to be able to celebrate my day with my family!! I’m turning a year older & wiser, like fine wine the more beautiful I am as a whole woman!! This year has taken me through a lot more than any year and I’m happy to say my experiences has made me stronger than ever!! Never knew I could be this strong, for myself, my children, and for my family! Happy Birthday to me & all my Libra’s out there we are the balance to it all!!

In late September, Santana shared a pic of himself cooking up a storm alongside Kimmy.

Earlier the same month, reports surfaced about Santana getting to reunite with Kimbella amid a publicized gun possession arrest.

The rapper was prohibited from living with her until now because he was ordered to home incarceration at this mother’s house. Santana is now is under home detention, which allows him to leave his home for certain reasons. He will have to complete anger management/domestic violence counseling and will have to call for approval before leaving the home. He will also no longer have to submit to drug testing. (The Blast)

Happy Birthday Juelz…. Watching Him Grow Is Such A Joy… Daddy Loves U So Much… #Pop #YoungKing

According to reports, Juelz appeared in court last summer and pleaded guilty to his gun possession charge stemming from a March gun-related arrest.

Santana, whose real name is LaRon James, pleaded guilty Thursday to possession of a firearm by a convicted felon and carrying a weapon on an aircraft. The 36-year-old Totowa, NJ, resident faces up to 20 years in prison when he is sentenced Dec. 12. (Page Six)

The post Juelz Santana Reminds Kimbella He Loves Her W/ Endless B-Day Emojis: “I Love You” appeared first on SOHH.com.