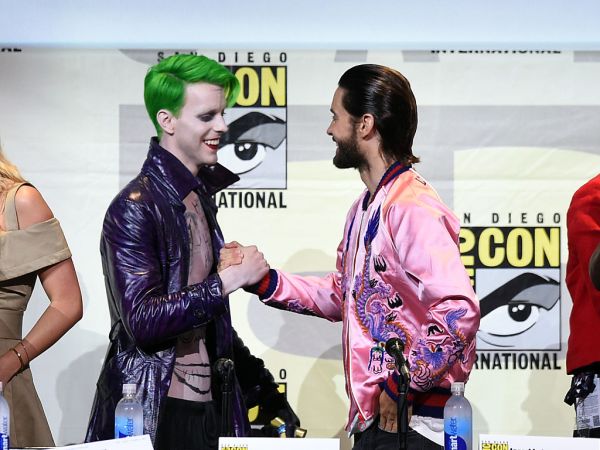 Of all the Jokers we’ve gotten over the decades, from Cesar Romero’s rendition of the classic Batman villain in the 1960s. to more recently, Joaquin Phoenix’s portrayal of the Clown Prince of Crime, Jared Leto’s depiction of the “hipster” Joker in 2016’s Suicide Squad was easily the least memorable and most forgettable. Maybe that’s the reason Leto tried to put the kibosh on Todd Phillips’ critically acclaimed Joker before it could begin filming.

According to The Hollywood Reporter the Thirty Seconds to Mars frontman felt “blindsided” when he learned that Warner Bros. was going to be granting Joaquin Phoenix his own Joker film and not only complained to his agents at CAA, but also tried to have his music manager, Irving Azoff, get in contact with Warner Bros. in an attempt to halt production of the film. Though Leto’s camp denies the allegations, Leto and Azoff have since parted ways.

It would make sense that Jared Leto would feel a way about the Todd Phillips-directed film as it was said he was promised his own standalone Joker film after he complained that a lot of the scenes he filmed for Suicide Squad were left on the cutting room floor. But before he could even muster up a script for his solo Joker adventure, Warner Bros. greenlit Todd Phillips’ vision starring Phoenix, and part of the reason they did so was because of Leto’s lackluster performance as Batman’s greatest villain.

At this point, sources say Leto’s days as the Joker likely are over. He will not reprise the role for Warners’ upcoming DC movies Birds of Prey (a spinoff centered on Robbie’s Harley Quinn) or in James Gunn’s The Suicide Squad, due out in 2021. Says one person involved in the situation: “How do you play the Joker you established following [Phoenix]? It kind of ends his Joker run.”

He will not be missed (no shots).

Ultimately Todd Phillips’ Joker not only ended Leto’s days in white and red makeup but apparently it was enough to end his relationship with CAA as “the actor felt his agents should have told him about the Phillips project earlier and fought harder for his version of Joker. Sources say Leto told his agents that they should stop the rival project, arguing that he wasn’t being treated properly as an Oscar winner (for Dallas Buyers Club).” He’s since left CAA for WME.

Unfortunately for Joker fans though, all signs point to Todd Phillip’s new classic origin story will indeed be a one shot deal as he has no plans of doing a sequel nor does he intend on having Joaquin Phoenix pop up anywhere in the current DCEU. It makes sense as his Joker story takes place in 1981 while current Batman films take place in today’s day and age. So chances are if Robert Pattinson’s Batman does eventually run into the Clown Prince of Crime it will once again be played by another actor hoping to get an Oscar nod. It sure as hell doesn’t seem like it’ll be Jared Leto though.