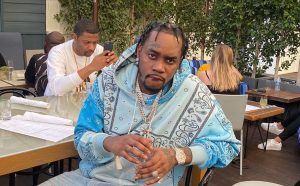 Fivio Foreign has undeniably a verse of the year candidate for his performance on “Off The Grid” from the DONDA album. The effort has received praise from fans and peers alike, but the highest came from Kanye West who compared Fivio to JAY-Z.

Fivio recently sat with the L.A. Leakers and revealed Kanye made a comparison between him and Hov.

Do you see the comparison? You can hear “Off The Grid” below.

The post Is Fivio Foreign Similar JAY-Z? Kanye Thinks So appeared first on The Source.