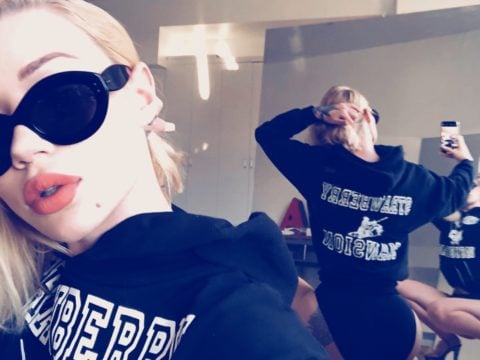 Australian rapper Iggy Azalea is low-key getting help when it comes to losing weight. The hip-hop diva has let fans see what secret potion is getting her looking slim thick.

Iggy went to Instagram Monday (November 26) with a selfie pic and salute to her diet secret.

A few days ago, New York rapper Cardi B revealed her own method to losing baby fat.

“Hey guys, this is my body four months after giving birth. I lost a little bit more weight than I actually wanted to lose but if I wanted to lose all the baby fat in my stomach, I just had to. I want to thank Teami. Teami really helped me in the process of losing my baby weight and every morning, or some mornings, I would drink Teami to help me curb my appetite and help my metabolism go a little bit faster and this is how I’ve been looking. No b*tch, I didn’t get lipo. I worked really hard so I could get my f*cking stomach looking like I used to look when I was a stripper. I still want to lose a little bit more fat right here [on my neck] but you know what I’m saying, I just gotta chill. I just want to say thank-you Teami. Even though I lost a lot of weight, I still drink Teami when I eat really fattening foods like cheeseburgers and everything and late night snacks.”

“Imagine having to F**K Wendy Williams. Sometimes I disgust my own self. I guess I just feel like if you’re pushing 60 without ever having lived an entire year on this planet where we could deem you attractive let alone a serve with a voice that would make anyone soft — you should keep it a whole lot cuter on certain commentary.” (Celebrity Insider)

“We haven’t heard from Iggy since ‘Fancy’ so technically she’s right. Isn’t she from Australia? When did she develop a blackcent? She probably bought that at the same place she bought her booty and her boobs. Oh please. That is good coin well spent. She looks great! I think Iggy Azalea is beautiful” – you’re 28, you’re a grown woman, you have a fledgling career that nobody cares about. This ‘Catch Me Outside’ girl is the next big thing. You should act unbothered by it all.” (“The Wendy Williams Show”)